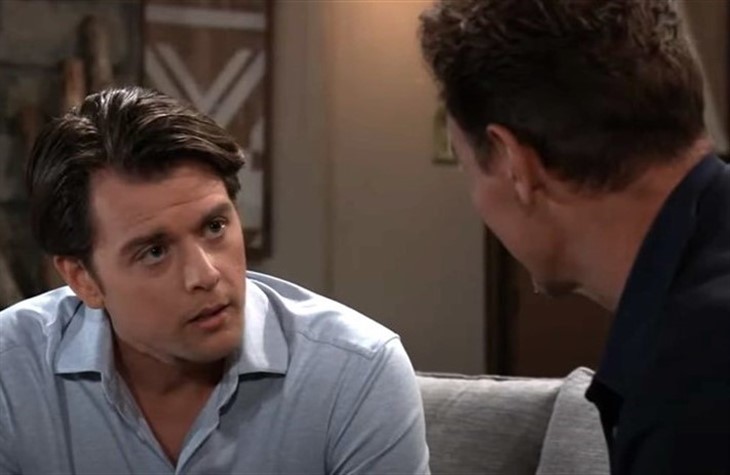 General Hospital (GH) spoilers tease Jasper “Jax” Jacks (Ingo Rademacher) is generally thought of as a good, law-abiding resident of Port Charles especially if compared to his biggest rival, the presumed dead Sonny Corinthos (Maurice Bernard). But the truth is that Jax will play dirty when circumstances all for it. And right now, Jax is desperate to win back the love of Nina Reeves (Cynthia Watros) so he might be about to do something he wouldn’t normally do.

General Hospital Spoilers – Harrison Chase Is Barely Holding On The Life After His Poisoning!

As viewers know, Harrison Chase (Josh Swickard) was poisoned by Peter August (Wes Ramsey) and Dr. Hamilton Finn (Michael Easton) is working diligently to find a cure but it’s not known if he will be able to save him in time. Meanwhile, Michael Corinthos (Chad Duell) and Willow Tait (Katelyn MacMullen) are allowing Chase to believe that he and Willow are getting back together but the truth is that Michael and Willow are very much in love. But as long as Chase is ill, they don’t want to do anything that will harm his recovery. If his spirit is broken, Chase may lose the will to live and give up before Finn can find a cure. But someone was watching as Michael and Willow were making love, and it seems that person may very well have been Jax!

GH Spoilers – Jasper “Jax” Jacks Isn’t Above Using Blackmail To Get What He Wants!

Jax screwed up his relationship with Nina Reeves (Cynthia Watros) by withholding the fact that Nelle Benson (Chloe Lanier) was Nina’s long-lost daughter. But he still loves her and hopes that Michael will allow Nina to see her grandson Wiley Corinthos (Erik and Theo Olsen). Michael has been reluctant to allow Nina access to Wiley because the last time they had a visit, Nina told Wiley that Willow wasn’t really his mother. Nina apologized but the damage was done, so Nina left town. Jax is feeling Nina growing further apart from him, so look for him to give Michael an ultimatum.

Michael will likely be shocked when Jax reveals that he knows Willow and Michael are together and will tell Chase unless Michael allows Nina to see Wiley. Michael has looked to Jax as a father figure since he was little so he will likely be blindsided. Jax knows that Michael could never let Chase lose the will to live so it looks like Michael and Willow will have no choice. If Chase were cured then they could reveal the truth, but right now Chase’s survival is the priority. So it won’t be long before Nina is able to once again see Wiley. But Michael won’t forget Jax’s blackmail. Jax may permanently ruin his relationship with Michael over this, so Michael will tell Jax it better have been worth it.

Was the Jax the person spying on Michael and Willow? Will he blackmail Michael into letting Nina see Wiley? And will this be the end of Jax’s and Michael’s relationship? Love makes people do unthinkable things in Port Charles so stay tuned to General Hospital airing weekdays on ABC. And don’t forget to check back right here regularly for all your General Hospital news, information, and spoilers!