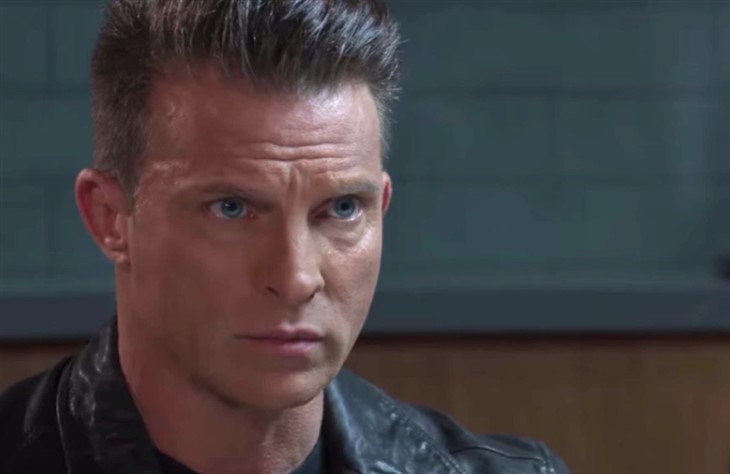 General Hospital (DH) spoilers tease that Jason Morgan (Steve Burton) will tell Nikolas Cassadine (Marcus Coloma) off in an upcoming episode of General Hospital. Jason will be angry with Nikolas for his endangerment of Carly Corinthos (Laura Wright) and others by his interference in the Cyrus Renault (Jeff Kober) situation.

General Hospital viewers will remember that the first thing Nikolas did to endanger Carly, Jason, and Port Charles, in general, was to find Cyrus’ mother. Nikolas was trying to protect his aunt, Alexis Davis (Nancy Lee Grahn) in Pentonville Prison, which Cyrus had a lot of influence over. Cyrus may have even owned it since he has a lot of real estate and Pentonville is a privatized prison. So he made a deal with Cyrus to find his mother, Florence Grey (Annie Abbott), and return her to Cyrus, which he did.

But in doing so, he took away the only leverage that Carly and Jason had over Cyrus! Then, to tick Cyrus off, even more, Nikolas had invited Cyrus and Martin Grey (Michael E.Knight) over to a family dinner along with Laura and Kevin Collins (Genie Francis, Jon Lindstrom) and of course Ava Cassadine (Maura West). Cyrus got in a bad argument with Laura, as General Hospital viewers will recall. Even worse, he got a call from one of his henchmen while there and realized that the so-called “family dinner” was only a diversion tactic!

He realized that Carly, Ava, and Laura were working together to keep him busy while Jason Morgan, (Steve Burton) whose back Cyrus had a target on, was being broken out of General Hospital! That made Cyrus really furious and Jason had to go on the run and hide while Carly had to deal with the Five Families meeting on her own! That is the first thing that Jason will have to discuss with Nikolas – his taking away their leverage!

Later, as General Hospital viewers will recall, Nikolas interfered in a Cyrus operation yet again! Gladys Corbin (Bonnie Burroughs) had agreed to recant her false testimony about seeing Jason drop the gun that killed Franco Baldwin (Roger Howarth) down a garbage chute. This got back to Cyrus, and he took her hostage and as a result, she was shot and Brando Corbin (Johnny Wactor) and his pregnant girlfriend Sasha Gilmore (Sofia Mattson) were endangered!

Cyrus wasn’t any too pleased that his driver impregnated a woman he was interested in, either! Again, Carly and Ava tricked Cyrus into thinking that he was going to get Gladys back in exchange for Damian Spinelli, (Bradford Anderson) who Cyrus had taken hostage. Ava had posed as Gladys, but never got out of the car where she sat in relative safety with Sonny Corinthos’ (Maurice Benard) men.

But Nikolas overheard Ava making the plan, and as Carly and the Corinthos henchmen tried to bargain with Cyrus, here came Nikolas with a gun pointed at Cyrus, and the whole operation nearly went south! General Hospital viewers will recall that all that saved the day was that Carly had called Jason in Canada and told him about Spinelli and he arrived just in time to shoot one of Cyrus’ goons who had his gun aimed at Nikolas and Ava! However, there was a bonus in that Cyrus was shot in the shoulder also!

Now that Cyrus is neutralized and under heavy guard at General Hospital, Jason plans to ream out Nikolas for his interference! Gladys gave her testimony to Port Charles Police Commissioner Jordan Ashford (Briana Nicole Henry) who recorded it on tape.

Gladys also named Peter August (Wes Ramsey) as the person who ditched the gun that killed Franco. Jason’s charges were dropped as a result and now he has Nikolas’ attention! Nikolas doesn’t think he’s heard that many words come out of Jason’s mouth the whole time he has known him, but Jason doesn’t sugarcoat what he has to say.

Nikolas endangered the lives of Carly, Spinelli, Ava, himself, and even his mother Laura and indirectly Portia and Trina Robinson (Brook Kerr, Sydney Mikayla) who Cyrus took hostage in Portia’s house. Plus, Curtis Ashford (Donnell Turner) was shot and fighting for his life! Jason may not even know about Nikolas buying out Pentonville, and here Cyrus will be going to the same prison as Alexis is in any way! Jason will be sure to make that point clear! Nikolas just remains speechless – he realizes that again his plans have backfired royally!