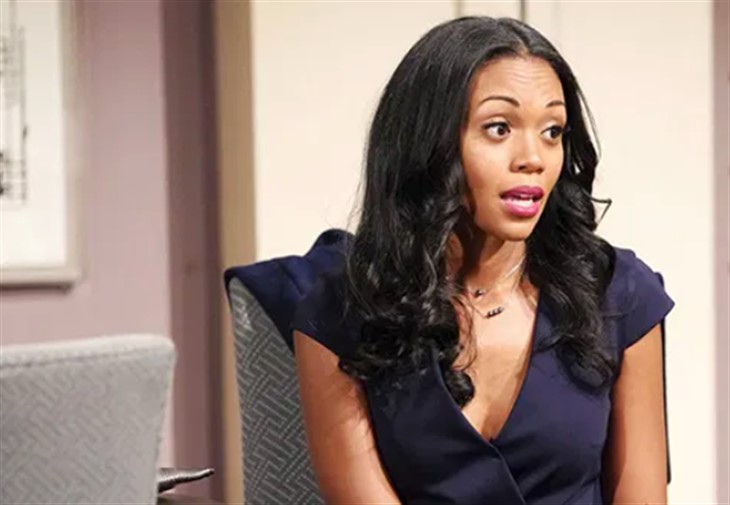 The Young and the Restless (Y&R) spoilers document that Amanda Sinclair (Mishael Morgan) has intentionally withheld the fact that Sutton Ames (Jack Landron) is her grandfather. That secret can’t possibly stay buried forever or even for a while now that Victor Newman (Eric Braeden) is nosing into Amanda’s backstory.

Victor picked up on Amanda’s reaction to him saying that Richard Nealon (no actor’s name known for this retrospective role) told him that he was searching for his child. That totally unexpected information countered Amanda’s theory that Richard was holding explosive information about Sutton possibly being bribed by Newman Enterprises approximately 30 years ago.

The Young And The Restless (Y&R) Spoilers: Nikki Newman Issues A Warning To Adam Newman

The Young And The Restless Spoilers – Entangled In Personal Business

There are many factors involved in this particular case that Amanda agreed to take due to her mother’s request. One of them involves Amanda realizing her lifelong dream of having a family, which has affected how she’s responded at every step so far in this process.

Another issue is the fallout that could happen if Sutton is guilty of anything. If Sutton was involved in Richard’s death, Amanda will be bound by the attorney-client privilege. Would Amanda be able to realize justice for her father if she learns that her grandfather, who is her client, was involved?

Y&R Spoilers – Naya Benedict May Know More Than She Tells

Viewers don’t yet know if Naya Benedict (Ptosha Storey) is telling Amanda the whole truth. It could be that Storey’s character doesn’t know anything more than what’s been said.

Alternatively, Naya could be unwilling to divulge how everything came to pass when she was in college, pregnant with Richard’s twins. Might she have learned then, as the years passed, or now about Sutton’s fierce defense of his reputation, which included silencing Amanda and Hilary Hamilton’s (Morgan) father?

The plot needs to unfold in a certain way in order for Naya and Amanda to bond. As for Sutton, his possible reveal as a duplicitous player would be dramatic and create at least temporary repercussions between this mother and her surviving daughter.

Victor won’t let a situation that involves Newman Enterprises reputation and one of its former employee’s rest. So, he’s having his minions dig into Amanda’s past.

This search is being teased as a plot path toward eventual answers. One referenced character, Eric Benedict (no actor known to be cast for this role), who is Naya’s husband and the father of Amanda’s half-sister, Imani Benedict (Leigh-Ann Rose), is particularly intriguing in this regard.

The Young And The Restless (Y&R) Spoilers: Summer Cozies Up To Harrison, Victor Plotshttps://t.co/b7pEtY17u7

Having Eric be unmasked as the sole bad guy in this tale makes sense. He’s a side character who could be easily written out. Eric could have been motivated by jealously in some form of attack against Richard.

Additionally, Imani’s father could have been working with Sutton to make sure that Richard was neutralized as a perceived threat. Naya’s happiness, along with the Ames and Benedict family’s stability, would have been protected in that scenario.