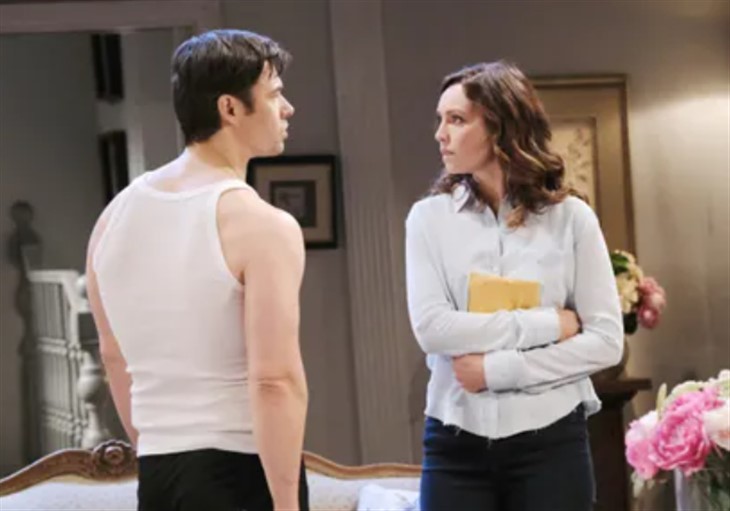 Days of Our Lives (DOOL) spoilers reveal that Xander Kiriakis (Paul Telfer) threatens Dr. Snyder (Michael Lowry). However, when the man turns up dead in a few weeks, Gwen could wonder if Xander killed him. Meanwhile, he will suspect that Gwen Rizczech (Emily O’Brien) is the murderer. Could they both be innocent and if so, who is the real killer?

DOOL spoilers reveal that Xander threatens Dr. Snyder after spying on Gwen’s phone call. He finds out who is blackmailing her and tells Dr. Snyder he better leave Gwen alone or else. Of course, he’s not doing this for Gwen’s sake. He really considers Jack Deveraux (Matthew Ashford) to be a true friend. We’re not exactly sure if Jack feels the same way about Xander. However, it is good that Xander is trying to protect him from Gwen’s damaging decisions.

Meanwhile, Gwen is desperately trying to keep Jack from getting hurt. She says that she regrets all the bad choices she has made. However, we have to wonder why Gwen doesn’t just tell everyone the truth about the miscarriage. She’s done a lot worse to Jack, Jennifer Horton (Melissa Reeves/Cady McClain), Abigail DiMera (Marci Miller), and Chad DiMera (Billy Flynn).

Plus, didn’t Gwen already confess this secret to Jack? He told Chad about it, and Abigail found out after she left town. However, Abigail feels that she still needs time away from Salem — and Gwen. So, when you take this into consideration, Gwen giving into Dr. Snyder’s blackmail doesn’t make a whole lot of sense.

Days of Our Lives spoilers reveal that in two weeks, Johnny DiMera (Carson Boatman) will make his big entrance. He will be coming in just as a dead body is discovered in the lake. Claire Brady (Isabel Durant), Ben Weston (Robert Scott Wilson), Tripp Johnson (Lucas Adams), and Allie Horton (Lindsay Arnold) all get really squeamish when they make the discovery. Eli Grant (Lamon Archey) will be taking the lead on the investigation.

Now, Xander and Gwen have a secret to keep, which is Dr. Snyder’s blackmail. However, nobody else knows about it. When the body is discovered in the lake, Xander might suspect that Gwen took care of her problem herself. However, Gwen could wonder if Xander took action against the drug dealing physician.

DOOL Spoilers – Both Innocent Of Murder?

It is teased that Xander and Gwen are both sticking around. They will also turn their hatred for one another into passion. So, neither of them are going down for murder or going to prison. This means that someone else kills Dr. Snyder, but who? We are thinking it’s someone off the canvas because nobody else is expendable. Perhaps when the mob comes to town, that is who ends up committing murder. With all the storylines Dr. Snyder is tied to, it wouldn’t surprise us if he had a deal with the mob that goes sour.