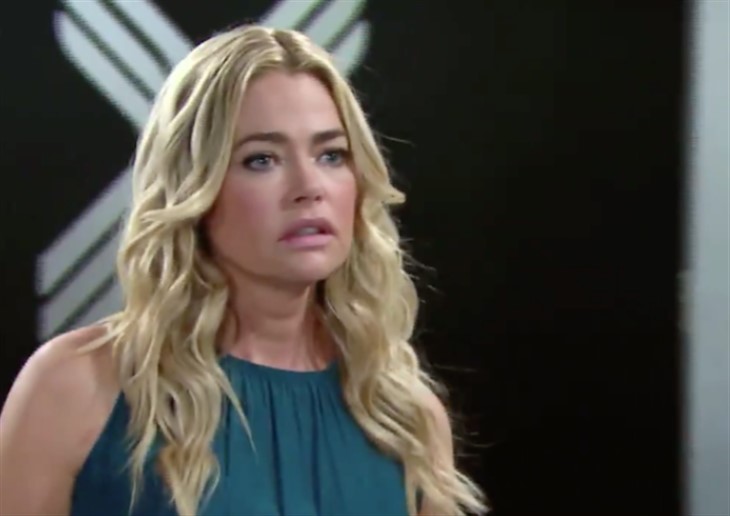 The Bold and the Beautiful spoilers document that Shauna Fulton (Denise Richards) acted out of selfless loyalty to her best friend, Quinn Fuller Forrester (Rena Sofer). But neither lady has control over the implications of the lies they’ve told.

Paris Buckingham (Diamond White) is playing an increasing role in the storyline that is building toward a climax. She is already privy to Shauna’s supposed connection with Carter Walton (Lawrence Saint-Victor) and now stands ready to learn that Quinn was the woman who was hiding in Carter’s room when Zoe Buckingham (Kiara Barnes) unexpectedly entered.

Eric Forrester (John McCook) entered the design office, where Quinn and Shauna were once again talking openly about the Quarter situation. And that’s a good way to describe what happened between Quinn and Carter, because the fallout is being furthered by reckless choices.

The Bold And The Beautiful (B&B) Spoilers: Can Carter keep His Secret From Zoe And Eric?

Quinn referenced Carter’s name to Shauna, with no seeming regard for the fact that they’ve had their conversations overheard in the past. Most famously, Eric learned about the breaking Bridge plot that Quinn directed when he walked in on a video chat his wife and Shauna were having. Eric’s awareness of that incident sparked disappointment that eventually led to a separation, a half-hearted reunion, and a recent near-ending of Queric’s marriage.

So, there’s little doubt that Eric will instantly recall that Quinn directly lied to him about the topic of her conversation with Shauna when the big reveal happens.

Shauna told Quinn that she wouldn’t lie to her daughter. But she was pressed on what both characters thought was a hypothetical scenario. It wasn’t, as fans witnessed the same-day scenes where Paris was informing Flo that Shauna confessed about her link to Carter.

Flo was right when denying that her mother would not have been involved with Carter without telling her. She didn’t know that Paris’ knowledge was faux, as per Shauna and Quinn’s latest plan.

Quinn coerced Shauna to lie to Eric about being involved with Carter. Viewers could see that Shauna bristled at having to do so. Now, with Flo’s demand for intel, the pressure builds.

The Bold And The Beautiful (B&B) Spoilers: Steffy Under Stress, Baby In Trouble? https://t.co/P7FGT0vkW1 pic.twitter.com/usolmARDAJ

The Bold And The Beautiful Spoilers – Goodbye, Quinn Fuller Forrester

When will Eric tell Quinn to get out? Might he be so enraged that his health will be severely affected as well?

The above questions are fair to ask. But one that isn’t is whether Quinn will be able to keep the secret from her husband forever? This is B&B, so even the possibility of that happening seems incredibly remote.

Quinn fans are holding their breath, as they know fate awaits. At the same time, all those who are ready for Sofer’s character to receive her just punishments are rubbing their hands in heavy anticipation of the inevitable.