The Bold And The Beautiful (B&B) Spoilers: Zoe Living On Borrowed Time – How Does Reveal Happen? 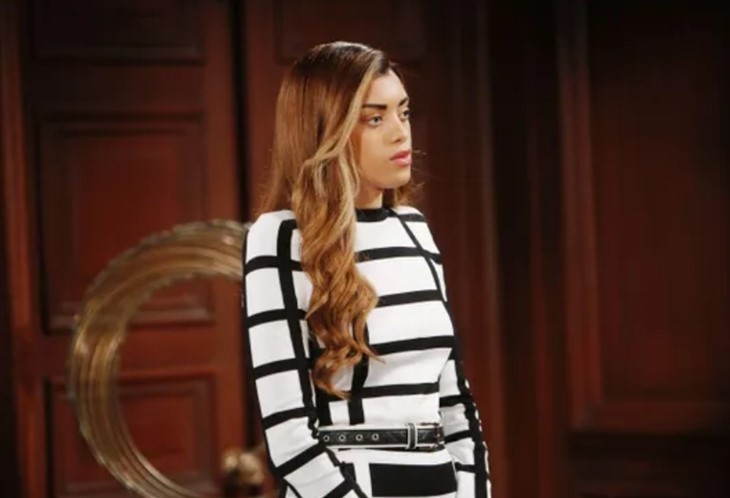 The Bold and the Beautiful (B&B) spoilers document that Zoe Buckingham (Kiara Barnes) is holding a false belief as truth. She thinks that her reconciliation with Carter Walton (Lawrence Saint-Victor) will last through the rest of her life here on this earth. But B&B fans believe that the end is likely coming very soon.

Zarter was a rushed couple because of Carter’s relationship insecurities. Zoe’s revealed interest in Zende Forrester Dominguez (Delon de Metz) was followed by the reveal to Carter, which was followed by his subsequent and still hidden involvement with Quinn Fuller Forrester (Rena Sofer).

Zoe glommed onto Quinn in the recent past. That bond was formed out of the desperation Zoe was feeling.

Carter was humiliated and infuriated when learning that Zoe considered him to be her second romantic choice. She’d accepted his marriage proposal and was wearing the bling ring he put on her finger. Yet, the ugly truth was lurking in her me-first soul.

It appeared as though Zoe was left out in the cold due to Zende’s rejection and Carter’s decision that Zarter was over. That’s when she became shallow pals with Quinn and trouble naturally followed for all involved.

Quinn’s reckless behavior has also long included her inability to be discrete, which is a potential wink at the immediate future.

Paris Buckingham (Diamond White) is a sweet soul. She came to town in order to be with her sister after graduating from college. While Zoe was glad to see her younger sibling, she soon viewed her as a threat when she wasn’t.

Zoe is fortunate that Paris is speaking to her. Barnes’ character treated her little sister like an enemy, purely based on Zende’s growing feelings for Paris.

It’s fair to believe that B&B has positioned Paris as the person who will learn about Quarter. How she handles that type of enlightenment would prove key.

The Bold And The Beautiful Spoilers – Zoe Buckingham Goes Back To England?

Zoe left England for the United States in an attempt to reconcile with Xander Avant (Adain Bradley). Part of Zoe’s pattern can continue if she leaves LA and returns home because her rebooted relationship with Carter collapses in the light of daytime.

The Bold And The Beautiful (B&B) Spoilers: Thomas Learns The Truth About Vinny https://t.co/AtH5B1ju3F pic.twitter.com/0YjBbDyLNi

So, Zoe could learn directly that her revived fiance had a fling with Quinn. Sofer’s character could also have yet another unguarded conversation with Shauna Fulton (Denise Richards), where either Zoe or Paris hear the soapy beans spill.

But having Carter involuntarily drop the reveal would be especially dramatic. The man who apparently moved to the top slot in Zoe’s heart could break it in such a scenario.

Barnes has already departed B&B in order to join the cast of the Fantasy Island revival series. So, devoted fans will see some form of resolution to Zoe’s storyline shortly.