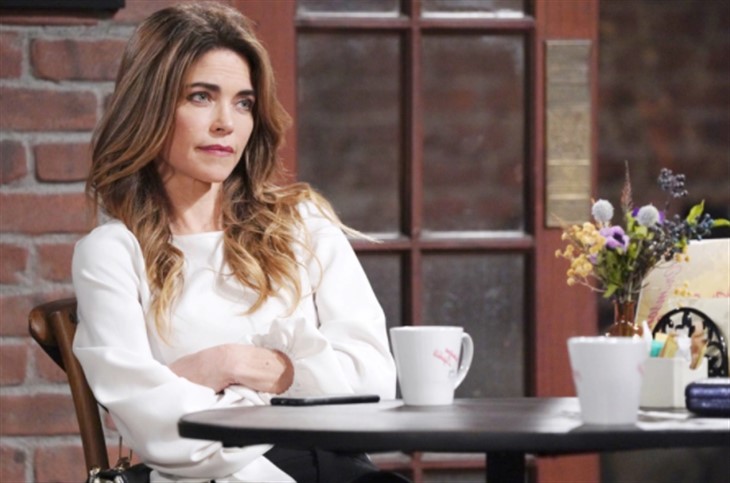 The Young and the Restless (Y&R) spoilers reveal that Victoria Newman (Amelia Heinle) is excited about her new love interest. While Victoria and Ashland Locke (Richard Burgi) have a lot in common, she could just be collateral damage. There is reason to believe that the divorce and custody war is just another scheme to target the Abbott family.

The Young And The Restless Spoilers – Ashland Locke’s Mind Games

Y&R spoilers reveal that Ashland has played mind games since his introduction. He even flat-out asked Kyle if he had slept with Tara Locke (Elizabeth Leiner). It was clear that Ashland suspected the affair at the very least. He might have even known about Harrison Locke’s (Keller Enriquez) paternity much longer than he claims. As Tara keeps saying, you never know what Ashland is going to do. He loves keeping people off-balance, but so does Tara.

Tara has been acting suspiciously ever since she arrived in Genoa City, too. When she first warned Kyle not to say anything about being Harrison’s real father, she seemed angry. Then, she turned the tables and went running for Kyle’s help and begged him to claim Harrison as his son. Next, she told Kyle that she was considering Ashland’s deal, which would mean he couldn’t ever have contact with his son ever again. Now, she’s going to turn the tables once again. We don’t think her back-and-forth is any coincidence. She’s keeping Kyle on his toes and keeping him off-balance, just like Ashland.

She also was considering Sally Spectra’s (Courtney Hope) deal even though she was playing it safe. Tara doesn’t know who is associated with who in Genoa City. So, she might not be sure if Sally was being real or if it was some kind of test. There is also Tara’s look on her face when Mariah Copeland (Camryn Grimes) mentioned Kyle and Summer Newman’s (Hunter King) wedding was back on.

The Young and the Restless spoilers reveal that Victoria is now getting close to Ashland. She is falling for him hard and quick, too. She blushes when Ashland calls her and it is teased they will be a power couple this summer. But what about when fall hits? What happens then? Victoria just might be collateral damage.

The Young And The Restless (Y&R) Spoilers: Rey And Michael Team Up – Sally Plotshttps://t.co/AtyBtj0gwQ

As fans recall, the lab tech went with Harrison and Tara to get a swab for the paternity test. There would have been plenty of opportunities for Tara to distract the lab tech and switch the swabs. Many fans are questioning if Harrison is even Kyle’s biological son.

This could all be just a big mind game to punish the Abbott family. Then, Ashland and Tara reconcile and take Harrison back to New York. But only after they get what they want, which we think has something to do with Kyle offering to help Tara’s business. Unfortunately, it will mean a lot of heartaches when the truth comes out.