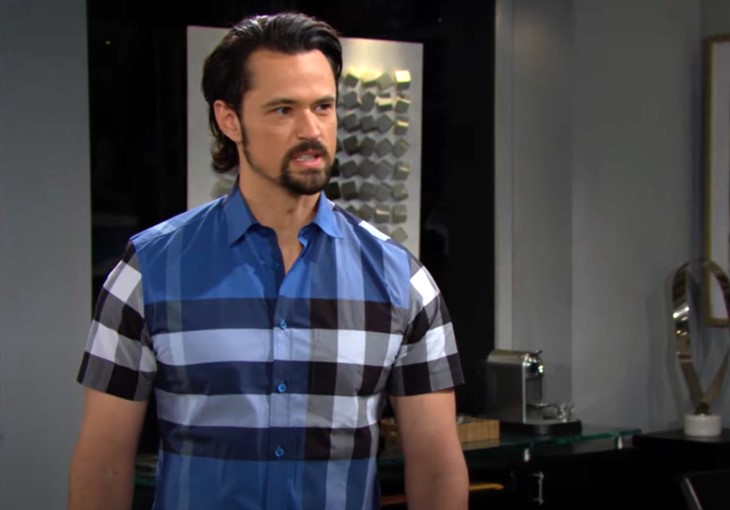 The Bold and the Beautiful (B&B) spoilers document that Thomas Forrester (Matthew Atkinson) was apoplectic when learning that Liam Spencer (Scott Clifton) hit Vincent Walker (Joe LoCicero) on Mulholland Drive. He couldn’t believe that his longtime nemesis, who was behaving very unusually since Vinny’s death, was the hit-and-run driver.

But Hope Spencer’s (Annika Noelle) intervention alters Thomas’ perception. With her description of the backstory details, Bill Spencer (Don Diamont) is revealed as the villain in this storyline.

The Bold And The Beautiful Spoilers – Liam Spencer Forced Into Corner

Liam was wrong in not reporting Vinny’s death to the authorities on the night in question. While Clifton’s character passed out after watching Vinny take his last breath, he regained consciousness a short time later in Bill’s car.

Clifton’s character partially steadied himself by the time Bill drove back to the mansion. While he was still in shock, Liam recognized that they had to report the accident and forcefully told his father that there was still time to make that happen.

Bill’s coercion convinced Liam to remain silent through the point in the plot where he and Hope went to police headquarters. Deputy Chief Bradley Baker (Dan Martin) was stunned by Liam’s confession.

Thomas and John Finnegan’s (Tanner Novlan) confrontation with Vinny led to LoCicero’s character running out of the hospital laboratory. That’s where Vinny rigged Stephanie Forrester’s (Jacqueline MacInnes Wood) paternity test results and finally admitted to doing so after engaging in a physical confrontation.

Vinny was later arrested for his actions and jailed. A period of time passed before viewers saw Ridge Forrester (Thorsten Kaye) receive a call at Forrester Creations executive suite. That served to further the plot, but viewers knew the climax had yet to arrive.

Thomas electronically blocked Vinny, which meant that he couldn’t contact him after later being let out on bail. So, when Thomas learned that his childhood friend was hit and left for dead, guilt naturally took stronghold.

The Bold And The Beautiful (B&B) Spoilers: Quinn And Carter Rehash Everything – Paris’ Decision https://t.co/GVEMezXtak pic.twitter.com/BiA0BfOxAU

The Bold And The Beautiful Spoilers – Bill Spencer Is A Coward

The subject header is a hashtag to apply. But the manner in which Bill has spoken about Vinny after his death is reprehensible. He’s shown no remorse for the accident impact or for not reporting that tragic incident to the authorities.

Thomas will realize that Bill, not Liam, shoulders the brunt of the blame. The recent rough conversation Atkinson and Diamont’s characters had at Spencer Publications will simply be the precursor for what’s to come.