Days Of Our Lives (DOOL) Spoilers: Sami Torn Between Ej And Lucas, Can’t Decide Who She Wants! 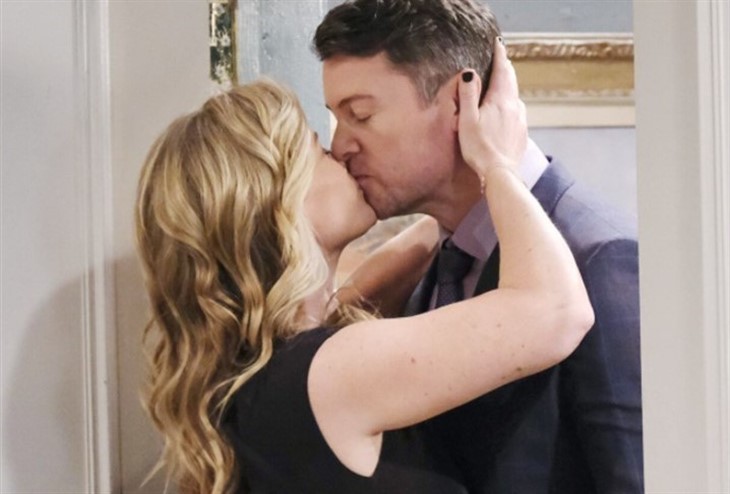 Days of Our Lives (DOOL) spoilers tease that Sami DiMera (Alison Sweeney) will be torn between EJ DiMera (Dan Feurreriegel) and Lucas Horton (Bryan Datillo) in upcoming episodes of Days of Our Lives! Sami won’t be able to make up her mind who she wants!

Days of Our Lives viewers will recall that the reason that Sami fell back into the arms of her first husband Lucas, to begin with was that EJ had been neglectful and cold. Sami had also described him as overbearing and authoritarian, and she had spent many years trying to nurse him back to health. Longtime Days of Our Lives viewers will remember that EJ literally came back from the dead.

He had been shot to death, and Stefano DiMera (Joseph Mascolo) had ordered Dr. Wilhelm Rolf (William Utay) to inject him with something, which at the time was experimental, as EJ laid in the morgue. A few years later Sami discovered he was alive in Rolf’s lab, which was inside a warehouse in Nashville, Tennessee which had exploded with Nicole Walker, now Nicole Brady (Arianne Zucker) trapped inside. Sami managed to get EJ out safely and back to Italy, while Nicole was feared dead by Eric Brady (Greg Vaughan) and Brady Black (Eric Martsolf) although they were able to get Holly Jonas (Elin Alexander) out safely.

Others also emerged alive, the first of which was Jack Deveraux (Matthew Ashford) although he had amnesia. Then Nicole and Tony DiMera (Thaao Penghlis) were discovered alive by Eric, as well as Vivian Alamain (Linda Dano). The most recent survivor is Ava Vitali (Tamara Braun). EJ showed up at the door of Marlena Evans’ (Deidre Hall) and John Black’s (Drake Hogestyn) condo as Lucas had been trying to convince Sami to give his and her love another chance! Sami was surprised, to say the least when EJ first looked stern and angry, only to break out into a broad smile! Could EJ have finally come out of his funk?

DOOL Spoilers – Sami DiMera Doubles Up On Her Love Life, Can’t Make Up Her Mind!

The Days of Our Lives weekly preview for the week of June 7 shows what Sami will go through with the arrival of EJ. She’s still sleeping with Lucas, who is still trying to convince her to divorce EJ and remarry him. It appears that she starts sleeping with EJ as well, and he knows she’s been sleeping with Lucas. EJ asks Sami about it in the preview, and he tenderly holds her face in his hands as she weeps.

Days Of Our Lives (DOOL) Spoilers: EJ’s Minions Watching Sami, Alerted Him To ‘Snake’ Moving In On Wifehttps://t.co/SN9dsr5pTQ

But behind her back is another story – a not so nice EJ as he talks to someone, possibly Tony, and refers to “some swine trying to come between” him and his wife! EJ knows darn well who Lucas is, and that Lucas is the father of two of Sami’s children. Then Sami reconciles with EJ, which leaves Lucas with questions! Lucas confronts Sami and wants to know what’s going on because he had the understanding that Sami had told EJ they were through! Days of Our Lives viewers can tell that Sami’s heart is torn between Lucas and EJ because she has memories with both, children with both, and she appears to be in love with both!

Both Lucas and EJ are giving Sami a taste of the “good ole days”, so to speak. But if Sami continues to double up on her love life and try to keep one man from knowing about her sleeping with the other, playing them off against each other, Sami’s going to be in trouble with both of them! She’d better make a decision and stick to it!