The Bold And The Beautiful (B&B) Spoilers: Jailed Liam Causes Problems For Steffy And Finn 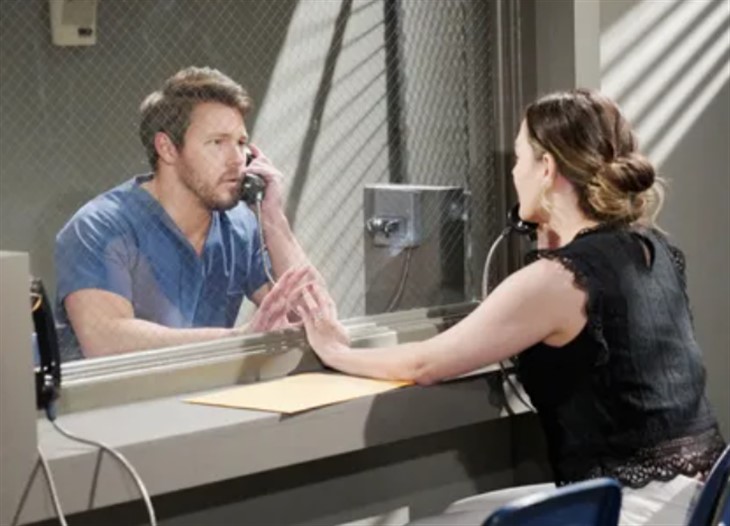 Steffy and Finn have become B&B’s hottest new couples. With a baby on the way and a wedding in the works, things are looking up for the two. However, that happy feeling may not last long.

Like all soap couples, Steffy and Finn faced problems. And they’ll have another issue that will put them at odds. That issue is Steffy’s ex Liam Spencer (Scott Clifton).

The Bold And The Beautiful (B&B) Spoilers: Liam Pushes ‘Thrope’ Before Release, Hope Ends Up Pregnant

Upcoming spoilers reveal that Steffy will visit Liam while he’s in prison. Liam is awaiting trial for his role in the death of Vinny Walker (Joe LoCicero). Liam’s arrest not only affects Hope Logan (Annika Noelle), but also Steffy.

Liam and Steffy share a daughter, Kelly Spencer (Avalon and Colette Gray). Although the couple is no longer romantically involved, they’re still connected as parents. Liam’s arrest is going to have a huge effect on Kelly. The young girl will have to face life growing up without her father.

This situation is just as hard on Liam as it is for his family. He needs all the support he can get, and one person who’ll be in his corner is Steffy. This week she checks up on Liam, but her good intentions aren’t going to go over well with Finn.

Although Steffy’s only looking out for Liam as a friend, Finn is going to be suspicious of her actions. Finn knows the hold that Liam has over Steffy, and he’s worried history may be repeating itself.

It wasn’t that long ago that Steffy and Liam got drunk, and had a one-night stand. When Steffy was unsure who the father of her unborn baby was that’s when she and Liam decided to confess the truth. Finn was upset but vowed to stay with Steffy even though he believed the baby wasn’t his.

After discovering that the baby was his and not Liam’s, Finn proposed to Steffy. Ready to start a future with Finn, Steffy finally took down the portrait of her and Liam that’d been hanging on the wall. Finn won Steffy’s heart, but he knows Liam isn’t going to be completely out of their lives.

He understands Liam is Kelly’s dad and has every right to see his daughter. But Finn doesn’t want Liam to interfere in his relationship with Steffy. Finn knows all about Liam’s waffling. For years, Liam’s been keeping Steffy on the sidelines in case things don’t work out with Hope.

But with Finn in the picture, he wants all that to end.

The Bold And The Beautiful Spoilers – Another Round Of Steam On The Way?

Steffy’s visit with Liam already has Sinn fans concerned. Although she’s dedicated to her future with Finn, her past with Liam is too hard to ignore.

Odds are when Liam’s released from prison, he and Hope will experience problems. When that happens, he’ll turn to the other person he can trust, Steffy. However, Finn isn’t going to stand for Liam continuing to give Steffy false Hope about a future together.

Liam almost destroyed Finn and Steffy’s relationship once, and he’s not about to do it again. With Finn taking a stand, he’s looking to put an end to Liam’s mind games, which only result in heartache for Steffy.