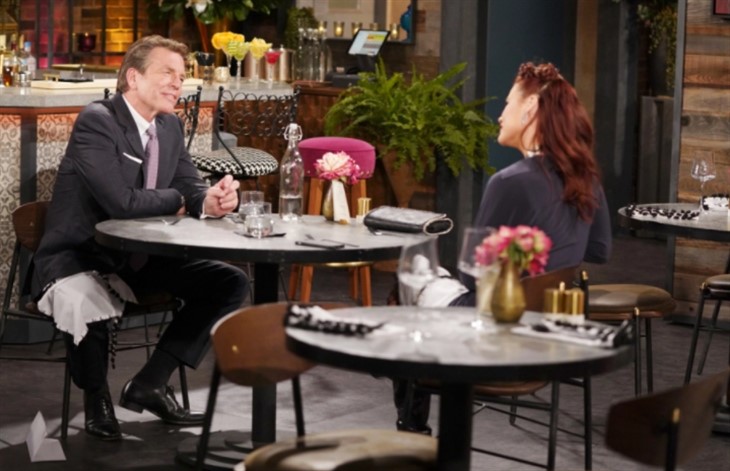 The Young and the Restless spoilers reveal that Sally Spectra (Courtney Hope) still hasn’t given up on Jack Abbott (Peter Bergman). He was horrified by her L.A. antics, which include kidnapping Flo Logan (Katrina Bowden) and faking a deadly disease. Some time has passed but Sally’s not giving up on him. The actress explains Sally’s new plan to get Jack back.

The Young And The Restless Spoilers – Jack Abbott’s Suspicion

Y&R spoilers reveal that Jack overhears Sally talking on the phone and she mentions going to L.A. After Sally hangs up, Jack asks if she is moving back to the big city. She explains that it’s just a trip. He is suspicious and starts questioning if she’s going there on business for Lauren Baldwin (Tracey E. Bregman). The recent transplant tells Jack that she’s going to Los Angeles to reconnect with an old friend.

Sally gets frustrated when Jack asks if she’s considering moving back to L.A. Now, this is the second person that Sally respects and likes that ask her that in one day. Lauren also suggested it earlier that day. Sally decides to test Jack and ask if he would be happy if she left Genoa City and moved back to Los Angeles. According to Hope, who interviewed with Soap Opera Digest, Jack replies that Genoa City might not be the right place for someone like her. He tells her going back to L.A. might be best.

The Young And The Restless Spoilers – Proving Oneself Through Work

The Young and the Restless spoilers reveal that Lauren tells Sally that she needs to forget about Jack. She lies and says that she’s not thinking about him and has moved on. She just wants to focus on her career. The part about her career is true, but Sally has not forgotten about Jack. In fact, Sally is hoping that if she makes a name for herself with her career in Genoa City, she might get back Jack.

The Young And The Restless Spoilers: Lily Sees Another Warning Sign – Billy Repeating The Past #yr #youngandrestlesshttps://t.co/dZXCVNIFXQ

Hope told the magazine that Sally thinks that making a name for herself in Genoa City through her career will somehow change people’s minds about her.

“Sally has been through a lot of heartbreak and has a lot of goals in life. She still cares about Jack and thinks very highly of him. She also thinks highly of Lauren, and she’s thinking, ‘If I can make something of myself and my career…’ It’s always [about] proving that, ‘I’m not this person that everyone thinks I am, that Jack thinks I am,’ and deciding ‘If I can make a name for myself, maybe, just maybe, I can get some forgiveness from Jack.’”