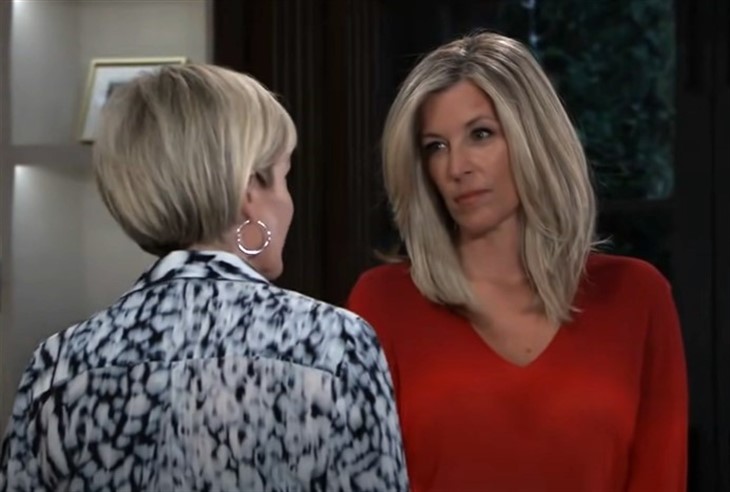 General Hospital (GH) spoilers and updates reveal tensions continue to rise in Port Charles. Ava Jerome (Maura West) and Carly Corinthos (Laura Wright) will throw suspicious glances toward Britt Westbourne (Kelly Thiebaud) and Jason Morgan (Steve Burton). Upcoming scenes show Ava share her observation with Carly. What are the two ladies thinking about the pair? Viewers will have to wait next week to find out.

Spoilers tease that Britt and Jason will grow closer together as the latter helps her fulfill some wishes on her bucket list. Fans may recall that Britt received some bad news about her health when it was confirmed that she had the marker for Huntington’s.

She felt hopeless when she learned that she only has six months left but Jason pointed out that she can very well live for 30 years more. He emphasized that instead of fearing the unknown, she should live each day to the fullest.

The pair may bond as Britt fulfills her bucket list and fans may very well see their relationship grow deeper if the show writers decided to explore this storyline.

Michael will ask Carly if she’s ready to give up her mob queen role and let Jason Morgan (Steve Burton) lead the family business. She’s gotten used to it so she might find it difficult to step down, which could lead to a conflict between her and Jason.

Elsewhere, Hamilton Finn (Michael Easton) will do whatever it takes to save Harrison Chase’s (Josh Swickard) life. The latter wants Finn to give up and just spend more time together rather than waste it in the laboratory. But Finn won’t stop fighting the battle and will continue to try to find out what he’s missing. But fans know that his cure didn’t work because it used his DNA rather than Gregory’s (Gregory Harrison).