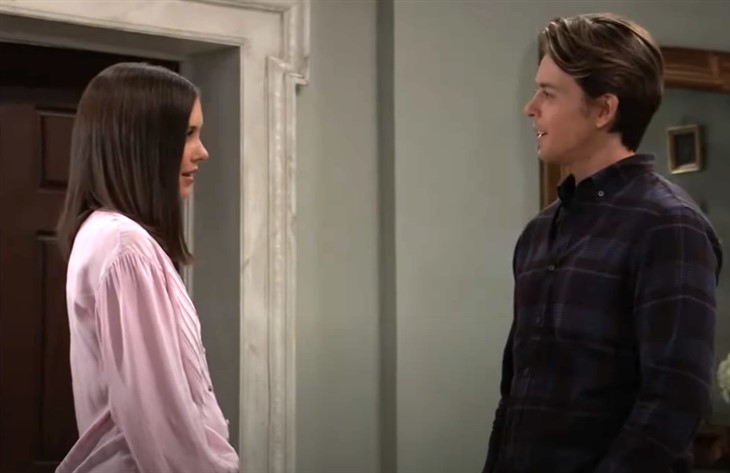 General Hospital (GH) spoilers reveal Willow shocked that at the spur of the moment she actually agreed to marry a dying Chase after spending weeks trying to figure out how to tell him she doesn’t want to be with him at all.

Willow (Katelyn MacMullen) is one wanted woman. She even had to run away from a cult since the cult leader was so obsessed with her. Now, she has one of the blandest men to walk the earth wanting to raise a child with her and spend the rest of his life with her, but she agreed to marry a less bland man because he is dying. What’s a Willow to do?

Marry Chase (Josh Swickard), we guess. Or at least that’s what she told him when we last left her on Friday. Now comes the time to tell Michael (Chad Duell). And that won’t be easy. She is now in love with Michael, after all, despite being obsessed with Chase, as well.

But first, there has to be a celebration with Chase and his family. Chase is thrilled Willow has agreed to marry him after he thought they’d never be together and Jackie (Kim Delaney) and Gregory (Gregory Harrison) are thrilled Chase can be happy during his last days on Earth. At this point, neither of them trusts Finn (Michael Easton) to come up with the cure after he screwed up so royally the last time. Willow feels uncomfortable around them and bows out to find Michael.

When Brook Lynn (Amanda Setton) learns Willow is going to marry Chase as a dying wish, she tries to talk Willow out of it. She knows Willow is with Michael and thinks this is a rotten thing to do to Chase. But does Brook Lynn really have room to talk considering how she is tricking Valentin (James Patrick Stuart)?

Willow is actually relieved someone else knows because she has felt too burdened and she manages to convince Brook to go along with her plan.

Finally, Willow tells Michael and like Michael is apt to do, he gets it. He feels bad for Chase and if this is what will make Chase happy then Willow has to do what is right. But what happens when Finn does inevitably find a cure? Stay tuned to General Hospital weekdays to find out.