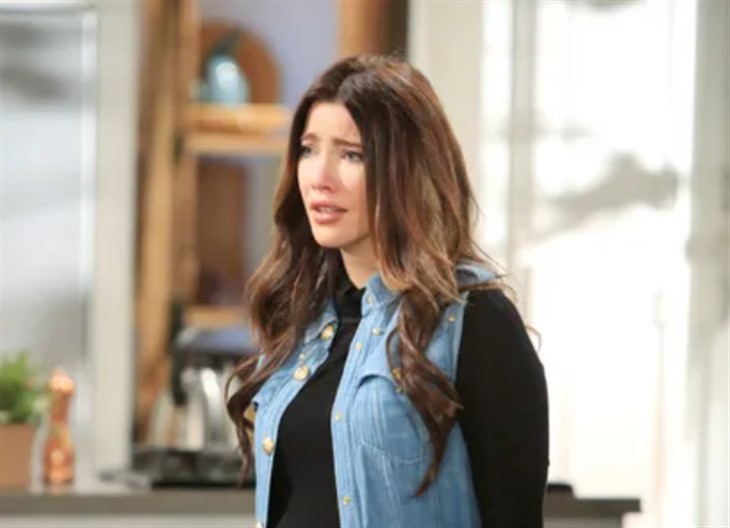 The Bold and the Beautiful spoilers document that Steffy Forrester’s (Jacqueline MacInnes Wood) return to Los Angeles, California, was not so coincidentally timed to Liam Spencer’s (Scott Clifton) confession and jail stay. Steam is no more, but the connection between Steffy and Liam endures for reasons that go beyond their daughter, Kelly Spencer (Avalon and Colette Gray).

Liam’s incarceration means that Kelly will be affected. But Steffy’s fresh engagement also means that she and John Finnegan (Tanner Novlan) are the lead story. Finn is soon to be Kelly’s stepfather, which Liam is grateful for during this dark time.

Devoted viewers recall that Liam didn’t take kindly to Finn during Sinn’s early days. Dating back to late last year, Finn quickly developed feelings for Steffy. Liam was onto that and didn’t like it.

The Bold And The Beautiful (B&B) Spoilers: Steffy Is Making A Huge Mistake With Liam – Does She Need A Shakedown?

Finn rejected Liam’s assertion that his personal emotions impacted Steffy’s care, resulting in her fall into pain-killer addiction. That wasn’t true, as Finn was very hesitant in refilling Steffy’s prescription. He did so, but with conditions that it would be her last.

Eventually, Liam came to see that Finn was a stand-up guy. But Finn didn’t forget the attack on his ethics and later set new rules where Liam’s involvement with Steffy was concerned.

Bold And The Beautiful Spoilers – How The Soapy Tale Turns

Now, less than a year later, Liam is behind bars. He’s admitted to hitting Vincent Walker (Joe LoCicero) many weeks ago and not reporting that crime until now.

Liam is in the position of needing Finn to be a stepfather to Kelly. That’s quite the reversal for Clifton’s character, who saw himself as morally superior to the good doctor.

Finn appears to be developing his thoughts in Liam’s regard and doesn’t want to pile on at this point in the storyline. Plus, with Liam in jail he won’t be interfering with Sinn, right?

Steffy’s number one concern is how Kelly will handle not being able to see her father. That issue won’t be talked away but must be dealt with. It would seem too much to take her to jail at this point in Kelly’s young life.

The Bold And The Beautiful Spoilers: Desperate Quinn Wants Paris To Stay Quiet – Will A Threat Come Next? https://t.co/jNJO1Oc0W0 pic.twitter.com/P9krZqLwBF

Steffy is pregnant with Finn’s baby, with Vinny’s rigged paternity test results being forcibly unmasked in the recent past. That led to LoCicero’s character being sent to prison, released on bail, and then hit by Liam, while Bill Spencer (Don Diamont) was in the passenger seat and then played the fixer.

So, Steffy must watch her stress level, which Finn is concerned about as well. Yes, Steam is no more. But Liam is once again a significant concern for Steffy. But the difference now is that Finn is number one, meaning that Liam’s precarious situation isn’t Steffy’s sole focus as it would have been if Sinn didn’t exist.