Days Of Our Lives (DOOL) Spoilers: Xander Has Advice For Nicole, Get Some Leverage Over Sami, Quick! 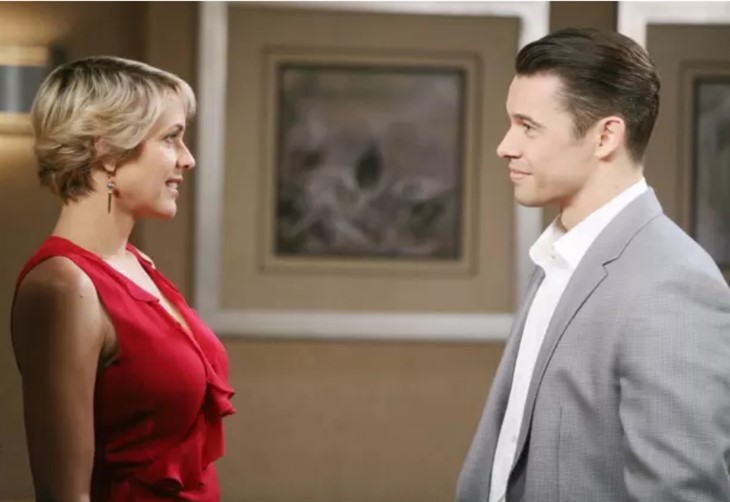 Days of Our Lives spoilers tease that Xander Cook (Paul Telfer) will have some advice for Nicole Brady (Arianne Zucker) in an upcoming episode of Days of Our Lives. He’ll tell her to get some leverage over Sami DiMera (Alison Sweeney) and quick!

Days Of Our Lives Spoilers – Sami DiMera Wasn’t Quite Buying Nicole Brady’s Receipts, But Could There Be Something Else?

Days of Our Lives viewers will remember that Sami before she was taken captive by Kristen DiMera (Stacy Haiduk) along with Lucas Horton (Bryan Datillo) in the DiMera wine cellar, saw Nicole and Xander stumble drunkenly into the Salem Inn. After Sami and Lucas were freed, she confronted Nicole about cheating on her twin Eric Brady (Greg Vaughan) with Xander!

Nicole mocked up some receipts to support the story she gave Sami, namely that the reason that there wasn’t a record of her staying the night there on her own as she claimed was that she used her corporate Basic Black credit card. Sami seemed satisfied for the moment, but Days of Our Lives viewers will recall that Nicole recently had entered an email confessional to Eric but didn’t send it – she, however, had saved it as a draft. It appeared to be a personal email account, whether the laptop was Nicole’s work laptop or a personal one.

Since she was outside the Basic Black office when she was using the laptop it may be a personal one. Days of Our Lives viewers know that Sami’s daughter and grandson, Allie Horton (Lindsay Arnold) and Henry Horton (Jayna and Kinsley Fox) live with Nicole, so Sami does on occasion visit with them there. Sami, ever the snooper, may take occasion to snoop in Nicole’s laptop if she sees it on and logged in while on a visit with her daughter and grandson – and while she might not send the email, she’ll use it against Nicole!

Days of Our Lives viewers know that Sami will either find a way to print the drafted email, load it onto a flash drive, or maybe take a picture of it on her phone. Then she’ll self-righteously trot right over to Nicole to confront her with what she has. Nicole would be well within her rights to turn Sami into the police – or at least Rafe Hernandez (Galen Gering)!

But Nicole would rather not embarrass herself to Rafe, so she won’t do that. However, she will turn to her unintended partner in love crimes Xander for advice as to what she can do! Xander has used leverage on Nicole herself, after all, and leveraged her into reconsidering her hiring him on at Basic Black! Xander will tell Nicole that the best way to shut Sami up and make sure she stays that way is to find something on her that she can leverage her with! Xander does have some dirt on Sami that Nicole could use to threaten her with, especially now that Sami’s husband, EJ DiMera (Dan Feurreriegel) has returned to town!

Xander knows that Lucas and Sami seemed to be quite a bit more than just co-parents and good friends when he threatened them with a gun down in the DiMera wine cellar, and he also knows Kristen had something on Sami. It doesn’t take a lot to figure out it has to do with Lucas and tells Nicole she doesn’t even have to go into detail. He suggests that all she has to do is tell her that he said Kristen had something on her and make Sami believe that Nicole knows what it is – it’s the fine art of insinuation. Nicole knows what she can do now to keep Sami quiet!