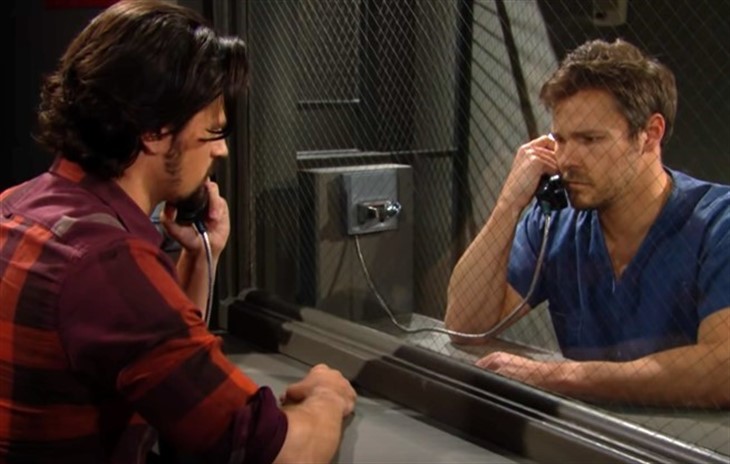 The Bold and the Beautiful (B&B) spoilers reveal that Thomas Forrester (Matthew Atkinson) finds evidence of Vincent “Vinny” Walker’s (Joe LoCicero) real killer. He actually has all the evidence that he needs to get both Liam Spencer (Scott Clifton) and Bill Spencer (Don Diamont) out of jail. However, will he actually turn it in or will he hide it so he can have his dream wife?

The Bold And The Beautiful Spoilers – Finding Evidence Proving Innocence

B&B spoilers reveal that before Vinny died, he sent a long string of text messages to Thomas. The messages — which Thomas never received because Vinny’s number was blocked — will lead Thomas to evidence that will clear Liam of murder.

The Bold And The Beautiful (B&B) Spoilers: Disagreement Over Thomas Leads To Another Ridge And Brooke Split

Liam isn’t the only one in hot water because of Vinny’s death and the hit-and-run. Bill is also facing charges for covering up a crime. Even though Liam is remorseful, Bill is not. He flat-out told Thomas that Vinny got what he deserved. Under normal circumstances, Thomas would prefer to see Bill rot just for disrespecting the dead. But Thomas is a different person these days.

As fans recall, the reformed villain was angry with him for tampering with Steffy Forrester’s (Jacqueline MacInnes Wood) paternity test. Not only did it hurt Thomas’ sister, but a man he actually likes and respects… John “Finn” Finnegan (Tanner Novlan). He also didn’t want to get Hope Logan Spencer (Annika Noelle) this way. Sure, Thomas and Liam have a rocky history. The Bold and the Beautiful spoilers reveal that Thomas realizes that Liam is who makes Hope happy. For the first time, her happiness matters more than his own.

Thomas isn’t going to let Liam go to prison for a murder he’s not responsible for. Despite Bill’s lack of remorse, Thomas will also help him get out of jail. He goes to the one person that could use this proof to clear both men… Justin Barber (Aaron D. Spears). However, Justin doesn’t take the evidence to the police. He doesn’t plan on showing the judge at the arraignment hearing. In fact, he punches Thomas, locks him in a cage, and hides the evidence.

Bill will never forgive Thomas for the pain he has caused Liam, Hope, and so many others. He might not even apologize for the cruel things he said about Vinny. However, he will have to accept that his freedom is because Thomas finally did the right thing and exposed Justin. Before all that happens though, Thomas has to get out of that cage.