The Young And The Restless (Y&R) Spoilers: Amanda Learns Naya Lied About Richard, Talked Before Death 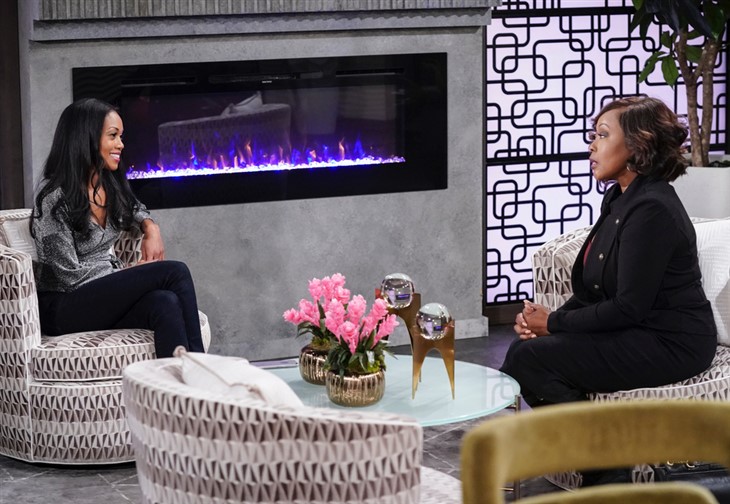 The Young and the Restless (Y&R) spoilers reveal that Amanda Sinclair (Mishael Morgan) quit Sutton Ames’ (Jack Landron) case. However, she is determined to find the truth about her father. Denise Tolliver (Telma Hopkins) informs her that Naya Benedict (Ptosha Storey) had a five-minute phone conversation with Amanda’s father prior to his death.

The Young And The Restless – Naya Benedict’s Claim

Y&R spoilers reveal that Naya has always claimed that she avoided Richard Nealon’s phone calls. She gave her babies up and continued living her cushy life. When she found a “suitable” mate, Naya married and became a mother again. This time, she raised the child since it was acceptable to Sutton. As fans know, that child is Amanda’s half-sister, Imani Benedict (Leigh-Anne Rose)

Denise was all set to retire but Amanda ended up giving her a case. She came through and provided Amanda with some information. Amanda has called her again and wants Denise to find out the truth about her father’s death. During the week of June 21, Denise will give Amanda some startling information.

The Young And The Restless – Amanda Sinclair’s Fury

The Young and the Restless spoilers reveal that Morgan spoke to Soap Opera Digest about the storyline. The actress confirmed that Denise tells Amanda something about Naya. It turns out Naya lied about cutting off communication with Richard.

“Denise reveals that he was not only constantly trying to call Sutton’s campaign office, he also made a call to Naya’s cell phone that lasted five minutes. Naya has always maintained that she avoided Richard’s calls and never spoke with him, but now here’s proof of a five-minute call. It’s not like Naya picked up and then hung right up; it looks like they definitely had a conversation.”

Amanda is furious that Naya lied to her and she wants to know why.

However, Sutton Ames is not a regular man. He is rich, powerful, controlling, secretive, and could be responsible for Richard’s death. If Amanda digs too deep, could she also find herself facing mortal danger? Why is the family being so secretive about this and how will the information change Amanda’s future? We will have to keep watching the CBS soap to find out