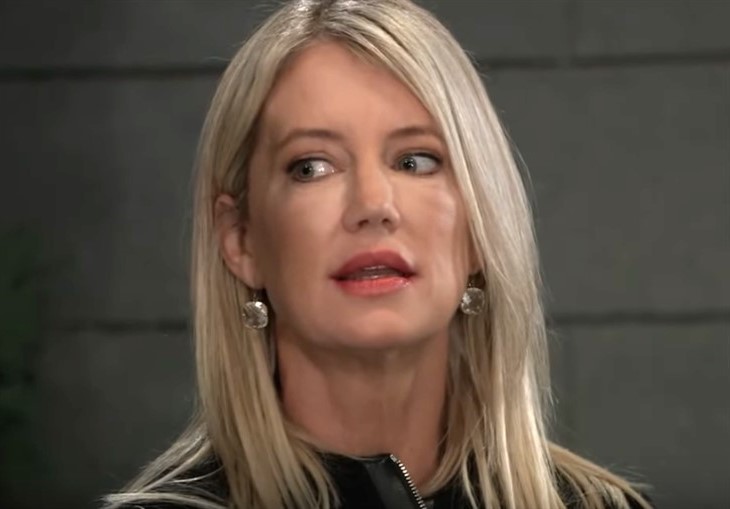 General Hospital viewers will recall that Nina has stayed in Nixon Falls, Pennsylvania for several months now – she never did make it to the Serenity Springs spa in Llanview, Pennsylvania that she was intending to go to. Instead, Nina has become sidetracked by the discovery of Sonny Corinthos (Maurice Benard) who doesn’t remember her or any of the rest of his life and goes by “Mike”, the name on the watch he found himself wearing.

General Hospital viewers will remember that Sonny was presumed dead after falling through a bridge after a scuffle with Julian Jerome (William DeVry) who didn’t make it and whose body was found right away. Sonny’s body was never found until a hiker near Nixon Falls found him nearly frozen in a snowdrift, and unconscious. The police were called and Trooper Ralph Finchley (Tatum Shank) a good friend of Phyllis and Lenny Caufield (Joyce Guy, Rif Hutton) brought him to Phyllis who got him to the hospital she works at for treatment. Sonny had amnesia, and no ID. His suit jacket, which likely had his wallet and identification in it was not on him when he was found in the snow. Sonny is lucky that all he lost was his memory! Sonny and Nina have gotten closer and closer, and are falling in love – but Nina cannot be with Sonny and with Wiley at the same time, she’ll have to choose!

General Hospital viewers will recall that Nina had meant to tell Carly Corinthos (Laura Wright) that she had discovered her husband alive. But when Nina called Carly, Carly was so verbally abusive to her that Nina just said the heck with it and kept the secret! But now, months later, Nina is falling in love with “Mike” and he is reciprocating; and Carly has declared Sonny dead so for all intents and purposes, Sonny would no longer legally be considered as married to Carly. Carly would have to go to court to have the declaration of death invalidated, and who knows how much red tape that would turn into? It might reach to Nixon Falls and back to Port Charles a couple of times at least!

Nina sees nothing wrong – tit for tat, quid pro quo- reap what she’d sown for Carly. After all, she and Jasper “Jax” Jacks (Ingo Rademacher) had conspired in keeping Nelle Benson’s (Chloe Lanier) identity as Nina’s birth daughter secret from her, and now Nelle is dead (we think, you never know in Port Charles)! Nina feels very justified in carrying on with Sonny as “Mike” and never telling Carly the truth!

But if she moved back to Port Charles, now she has a chance of spending much more time with her grandson Wiley Corinthos, which is all Nina has of Nelle. She feels very conflicted, because she feels like she has finally found true love and a good man in “Mike”, Sonny’s amnesiac persona is a lot different than the old Sonny! Nelle has a huge decision to make – move back to Port Charles and see Wiley a lot, or stay in Nixon Falls and have a future with “Mike”? Or, maybe just continue to go back and forth frequently?