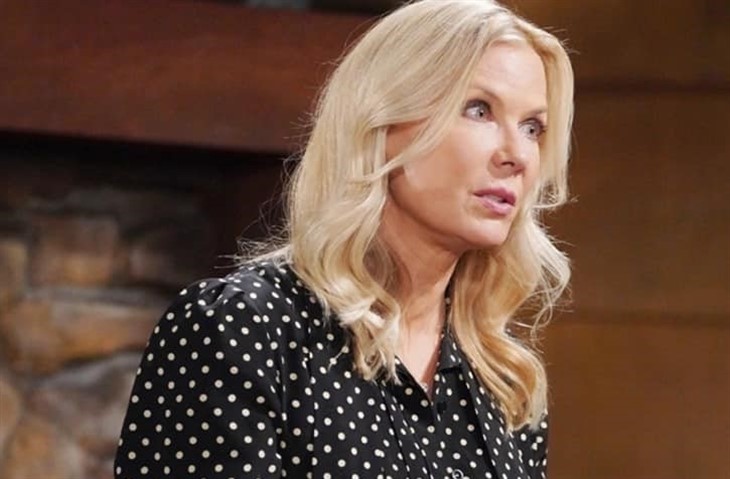 The Bold and the Beautiful (B&B) spoilers reveal that Quinn Forrester (Rena Sofer) is planning a vow renewal ceremony. She is worried about Paris Buckingham (Diamond White) exposing the truth. However, there is someone else that is onto the truth. Brooke Logan Forrester (Katherine Kelly Lang) starts to dig into Quinn’s motivations. When she finds out the truth, she delivers a dose of karma on Quinn’s special day.

The Bold And The Beautiful Spoilers – Breaking ‘Bridge’ Not Forgotten

B&B spoilers reveal that several months ago, Brooke kissed Bill Spencer (Don Diamont). Shauna Fulton (Denise Richards) captured the video and showed it to Quinn. However, she refused to give the file to her BFF. Unknown to Shauna, Quinn got sneaky and sent the file to herself from Shauna’s phone. Then, she exposed it during Brooke and Ridge Forrester’s (Thorsten Kaye) reunion party.

Despite a lot of time going by, Brooke hasn’t forgotten and she still wants payback.

This week, Quinn will be worried about Paris blabbing the truth about her fling. Quinn decides that her next move is to have a vow renewal ceremony. Eric Forrester (John McCook) thinks it’s a magnificent idea. He ends up turning to Carter Walton (Lawrence Saint-Victor) and we assume it’s to ask him to officiate. While Carter will probably agree, he might feel differently when he sees how beautiful Quinn looks on her special day.

The Bold And The Beautiful Spoilers – Brooke Logan Forrester’s Suspicion

The Bold and the Beautiful spoilers reveal that Quinn is busily making plans for the ceremony. Meanwhile, Paris will be conflicted on what to do. Even though Shauna lied to her daughter, we expect Paris to tell Flo Logan (Katrina Bowden) the truth. When news of the vow renewal hits Brooke’s ears, she is going to get suspicious, per Soap Opera Digest. There is a good chance that Brooke won’t grill Carter, Shauna, or Paris. She will bring it up to Flo, who will probably make it obvious she’s hiding something.

The Bold And The Beautiful Spoilers: Thomas Learns What REALLY Happened To Vinny #bb #boldandBeautifulhttps://t.co/XTizDFCATq

It is teased that Brooke finds out the truth and makes a plan to “save” Eric while getting revenge on Quinn. She wants to expose the truth at Quinn’s most vulnerable moment, though. She will likely wait until the day of the vow renewal ceremony and expose “Quarter” publicly, just as Quinn did to her. We imagine Eric will be confused at first, then devastated, and then angry. How will Quinn fix her marriage now? Is all hope lost or will Quinn somehow turn it around and blame her affair on Eric’s lack of intimacy? We will have to keep watching the CBS soap to find out.