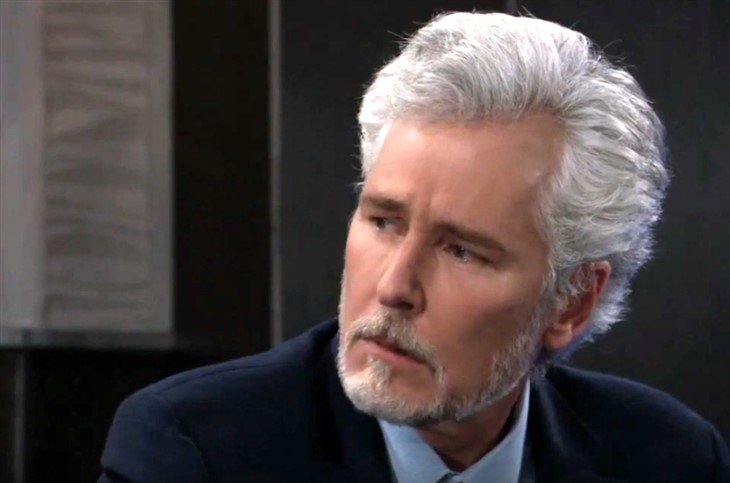 General Hospital (GH) spoilers and updates reveal Martin Grey (Michael E. Knight) has to decide what he is going to do next. Martin is a lawyer. He has helped Valentin Cassadine (James Patrick Stuart) with different legal matters. Valentin and Martin became friends. Martin represented Franco Baldwin (Roger Howarth) in his court case to determine his identity. Franco had been memory mapped with the memories of Drew Cain (Billy Miller) and believed that he was Drew instead of Franco Martin was able to win the case for Franco.

Martin also represented Nelle Benson (Chloe Lanier) when she was trying to get custody of her son Wiley Quartermaine-Corinthos (Theodore and Eric Olson) from Michael Corinthos (Chad Duell). He was unable to help Nelle get custody of Wiley. Martin found out that his brother Cyrus Renault (Jeff Kober) had set up his criminal organization in Port Charles. Martin and Cyrus disagreed on how their mother Florence Grey (Annie Abbott) should be cared for. Martin and Cyrus found out that they had a half sister Mayor Laura Collins (Genie Francis).

Laura was their sister because their father Gordon Grey (Eric Server) had an affair with her mother Lesley Webber (Denise Alexander). Martiin wanted to get close to Laura but the situation with Cyrus caused trouble between them. Cyrus has been arrested for his different crimes and has been sent to a prison out of the state. Martin does not know what he will do now that he does not have to be concerned about Cyrus.

Martin wants to prove to Laura that he will be a good brother to her. Laura wanted to get close to Martin but got concerned about him because of Cyrus. Martin can start to get close to Laura now that Cyrus has gone to jail. Martin hopes to get close to Nikolas Cassadine (Marcus Coloma) who is Laura’s son.

Martin wanted Nikolas Cassadine to help him to take care of his mother and protect her from Cyrus at one time. Nikolas tried to help Martin to keep Florence safe. Nikolas and his wife Ava Jerome Cassadine (Maura West) hosted a family party and invited Martin and Cyrus. However the family gathering did not end well. Martin will want try to find a way to get to know Laura and Nikolas better.

GH Spoilers – Martin Grey May Get a New Case

Martin may get a new case to work on. Martin wanted to help keep Alexis Davis (Nancy Lee Grahn) from going to jail over accidently attacking Dante Falconari (Dominic Zamprogna). Alexis decided to take responsibility for her actions and was sent to Pentonville Penitentiary. She has reconnected with Shawn Butler (Sean Blakemore) who is trying to get parole. Martin may try to help Alexis to help Shawn with his parole. Martin may be able to find a way for Alexis to be release from Pentonville early.

Martin is not in a relationship. Martin may find someone to start a relationship with. Bobbie Spencer (Jackie Zeman) helped to take care of Florence for a short time. Martin was grateful for her taking care of his mother. Martin may want to get to know Bobbie. Laura may think that Martin could be good for Monica Quartermaine (Leslie Charleson). Monica has not been in a serious relationship since she lost her husband Dr. Alan Quartermaine (Stuart Damon). Laura may think that Martin would be good for Monica.

General Hospital Martin will want to make a future for himself in Port Charles. Martin wants to get close to his family. Can Martin and Laura find a way to bond now that Cyrus is not in their lives? Can Martin support Nikolas and Ava if they need his help? Martin may be able to help Alexis and Shawn get out of jail. Can Martin provide the help they need to get them out of Pentonville? Martin might want to find a love connection. Could Martin find one with Bobbie or Monica?

Tune into General Hospital to find out what Martin does in regards to his future in Port Charles.