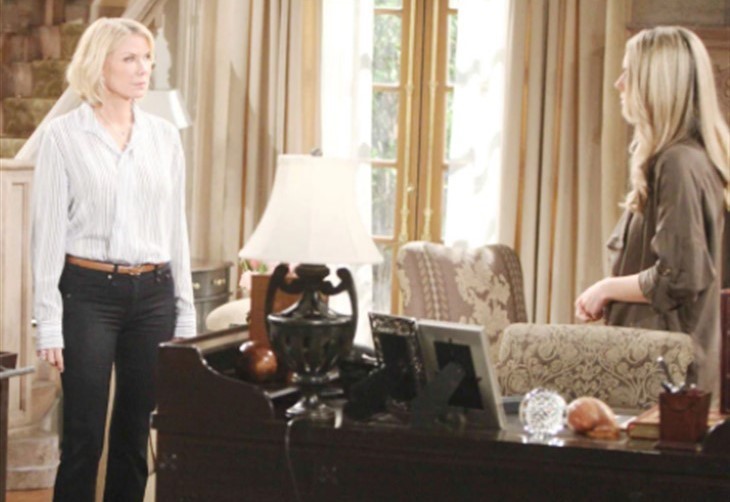 The Bold and the Beautiful (B&B) spoilers indicate that the bond between sisters Brooke Logan (Katherine Kelly Lang) and Katie Logan (Heather Tom) isn’t as strong as it appears.

The Logan and Spencer families have been going through a difficult time with the arrests of Liam Spencer (Scott Clifton) and Bill Spencer (Don Diamont). Liam and Bill are facing a long prison sentence for their roles in Vinny Walker’s (Joe LoCicero) death.

Hope Logan (Annika Noelle) is suffering heartbreak as she faces a life without Liam. Her mother Brooke has been offering emotional support to Hope as she adjusts to being a single mom.

Although, some fans are sympathetic towards Hope, others feel she’s selfish. Especially when she’s not the only Logan woman suffering in this situation.

Bill’s ex-wife Katie is also having a rough time. Like Liam, Bill is facing ramifications for his actions. Bill’s freedom, company, and family is at stake as he tries to formulate a plan to get out of prison.

One person who’s standing by Bill’s side is Katie. Although the couple is separated, recently they were making strides in getting back together. Now, the couple’s reunion is in jeopardy.

Katie’s heart breaks at seeing Bill in jail. Although she’s furious with him, she can also understand his reasoning for doing what he did. As Bill awaits word on his fate, Katie has to prepare the couple’s son Will Spencer (Finnegan George) for life with his dad.

B&B Spoilers – No One Has Thought Of Katie Logan

Katie is hurting just as much as Hope. She’s also facing life as a single mom along with being separated from her true love. Yet, her family seems to have no regard for her feelings.

Katie hasn’t been featured much on B&B lately, but she should be one of the focuses in this storyline with Bill and Liam. Yet, so far the story’s mostly been about Hope and Liam being kept apart once again.

A majority of Hope’s scenes consist of her and Brooke discussing Liam. Hope expresses her distress that Liam will be kept away from his children. She also continues to blame Bill for this situation and feels he should be the one behind bars, not Liam.

This whole storyline has angered B&B fans. One of the things that’s got them riled is Hope and Brooke’s selfishness. Neither one of them has expressed any concern about Katie.

Hope says it’s unfair for Liam to be separated from his kids. Yet, she perfectly fine with Bill being in prison, away from Will.

The Bold And The Beautiful (B&B) Spoilers Meanwhile, Brooke’s main focus has been on Hope and Liam. She’s hasn’t shown any concern towards Katie. As Bill’s friend, Brooke knows he’s hurting by being ripped away from Katie and Will. She knows Bill would want his family looked after, yet Brooke hasn’t made a move to reach out to Katie.

Although the Logan’s claim they’re a close knit family, they show their true colors when it comes to situations such as these. While Katie’s not receiving any support from Brooke or Hope, she’ll have plenty from Donna Logan (Jennifer Gareis), who appears to be the only family member concerned about her.