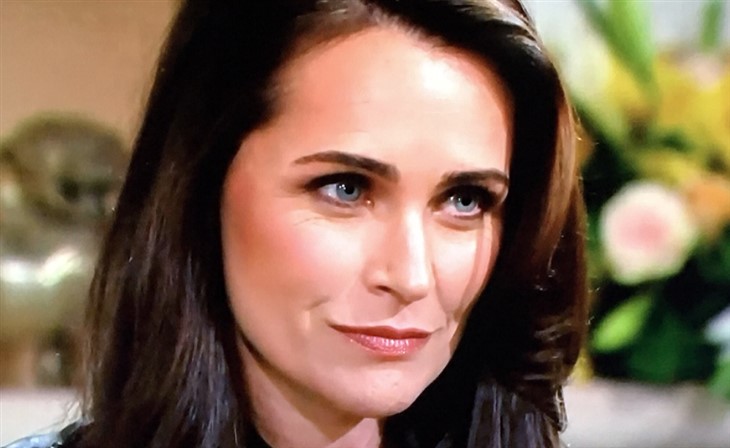 The Bold and the Beautiful (B&B) spoilers tease that Quinn Fuller Forrester (Rena Sofer) will try to employ a well-worn tactic by having another marriage related ceremony in the Forrester mansion living room. Buzz indicates that Eric Forrester (John McCook) will agree to a vow renewal ceremony.

However, the reinforced nuptials that are shrouded in Quinn’s recent break of them, project as the point in the plot where Quarter is exposed by none other than Brooke Logan Forrester (Katherine Kelly Lang). Meanwhile, ubiquitous officiant, Carter Walton (Lawrence Saint-Victor) would seem most likely to handle the intended affirming ceremony.

Quinn is calming down because she thinks she’s safe, having successfully covered the Quarter debacle. Viewers feel otherwise and sensed that doom was pending and justified.

Eric is far too gullible. He remains overwhelmed by Quinn’s piercing blue eyes and gorgeous face. Of course, behind her surface beauty is the inelegance of what Quinn willfully did to her husband on more than one occasion with Carter.

Shauna Fulton (Denise Richards) did more than most so-called friends would ever do. Quinn’s bacon was saved when Shauna selflessly pretended to be Carter’s distraction. She wasn’t, as Paris Buckingham (Diamond White) came to know.

Sofer’s character is the reason Paris realized that Quinn was the woman Carter turned to after he broke his initial engagement to Zoe Buckingham (Kiara Barnes). The current Mrs. Forrester has no concept of discreteness or self-control, which reinforces a clear need for mental health treatment.

With Paris having already confronted Shauna and Quinn, White’s character was set up as the one to spark the needed reveal. But the writing staff has different, historical plans in mind.

Brooke still doesn’t know that Quinn fiendishly poured alcohol into her juice bottle last year. Someone who lacks morals does that and also encourages Zoe to put Eric’s powdery stomach elixir into Paris’ health drink, then later uses the incident to try and make Paris think badly of her sister.

Lang’s iconic character always knew that Quinn was wrong for Eric. Brooke’s instincts are as sharp now as the unfortunate day she met her current rival.

How fitting that Brooke projects as the person who enlightens Eric and likely topples Queric once and for all, with the vow renewal ceremony being the setting for the climax within this storyline to drop on Quinn and Carter.