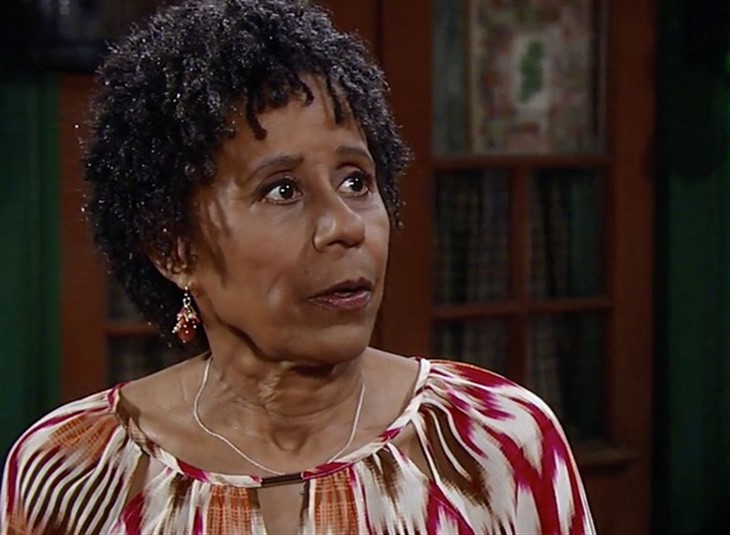 General Hospital (GH) spoilers indicate that Molly Lansing-Davis (Haley Pullos) and TJ Ashford (Tajh Bellow) will soon be threatened. While it’s possible the threat will be because of the nosing around that their parents are doing from Pentonville, perhaps someone else sees an opportunity to play matchmaker. Could Stella Henry (Vernae Watson) have made a false threat against the couple in order to bring Curtis Ashford (Donell Turner) and Jordan Ashford (Brianna Nicole Henry) back together?

As viewers know, Stella recently returned to Port Charles after her beloved nephew, Curtis was shot. Curtis was trying to save Laura Collins (Genie Francis) from her evil brother, Cyrus Renault (Jeff Kober). Stella noticed that Curtis seemed to be getting closer to Portia Robinson (Brooke Kerr) and she wasn’t happy about it at all. She even pulled Portia aside and made it clear that Curtis belonged to Jordan. Jordan and Curtis were in the process of getting a divorce, although Jordan admitted to Stella that she hadn’t yet signed the divorce papers. Stella encouraged Jordan to fight for her marriage. But perhaps, Stella decided to take things a step further. Perhaps if Jordan and Curtis worked together to keep TJ and Molly safe, then their old feelings would resurface?

But as General Hospital viewers are aware, Molly’s mother, Alexis Davis (Nancy Lee Grahn) is trying to help Shawn Butler (Sean Blakemore), TJ’ s father with his parole. It seems that forces are at work to keep Shawn in prison, most likely so he can’t find the person who really committed the crime that Shawn was sent to prison for. Shawn was convicted of trying to kill Hayden Barnes (Rebecca Budig) when it was really Nikolas Cassadine (Marcus Coloma) who hired the hitman that shot Hayden. If Alexis and Shawn are getting too close to the truth, Nikolas or one of the judges that Nikolas has apparently bribed to keep Shawn in prison, may actually threaten Molly and TJ in order to keep them from looking into the situation further.

If Stella has indeed created a false threat against TJ and Molly, then the police might be on a wild goose chase while the real threat goes unnoticed. Stella’s plan to reunite Jordan and Curtis could end up causing more problems and put Molly and TJ in real danger. Stella would never forgive herself if TJ or Molly were hurt because of her. While its possible that Curtis and Jordan might get back together while trying to help Molly and TJ, the damage could be much bigger than that if someone actually got hurt.

Are Molly and TJ in real danger because of Alexis and Shawn’s investigation? Or has Stella Henry created a phony threat in the hopes that Curtis and Jordan will reunite? Would Stella actually go that far? Matchmaking can have dangerous consequences in Port Charles so stay tuned to General Hospital airing weekdays on ABC. And don’t forget to check back right here regularly for all your General Hospital news, information and spoilers!