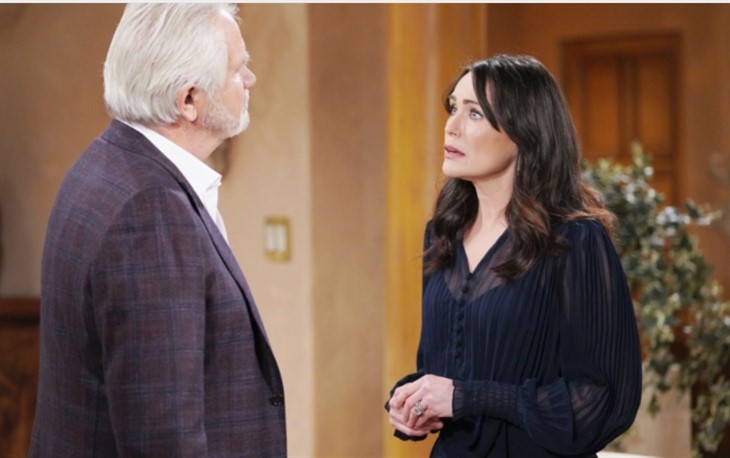 The Bold and the Beautiful (B&B) spoilers document that Quinn Fuller Forrester (Rena Sofer) wiggled her way out of yet another reckless situation. Eric Forrester (John McCook) caught Quinn and Carter Walton (Lawrence Saint-Victor) embracing in the design office at Forrester Creations. But, no matter, Quinn gazed at Eric and talked the matter away.

Eric is naive where Quinn is concerned. He’s not just forgiving. That’s become a cliche that let’s McCook’s iconic alter ego, who, along with Brooke Logan Forrester (as long played by Katherine Kelly Lang), is the only other original character on this show.

Why does Quinn feel the need to constantly rehash what happened between her and Carter?

The fans understand that her attraction to him could actually mean that Quarter has already formed and does not reflect a past tense connection. However, Quinn also believes that Eric is the man she loves and wants to remain married to. Although that could be the effect of familiarity, with Quinn subconsciously intending to wreck Queric so that Quarter can officially begin.

Regardless of Quinn’s obviously mixed feelings, she and Eric are together. But that union is fragile at best.

Teasers indicate that Quinn’s plan to renew Queric’s vows will be embraced. Eric is in a romantic mood, believing that he and his wife have fully reconnected. So, the vow renewal request will sound good to him.

It’s sad for those viewers who feel for Eric. He’s so blindly in love with Quinn that she overtakes the logical part of his mind.

For her part, Quinn knows that she’s gotten away with so many errors in judgment, or whatever other euphemistic phrase one wants to utter. Eric forgives her of anything because she holds a special place in his heart.

But her status is about to end. Brooke is expected to be involved with the fallout.

In effect, Quinn mesmerizes Eric. He knows that she has her flaws, but fully believes that she’s been loyal to him in recent years. His conclusion also affirms that he rationalized her kissing his son, Ridge Forrester (Thorsten Kaye), a handful of years ago.

Quinn has no self-control, but has managed to maintain her tie to Eric. Now, with doom pending, anti-Quinn fans can prepared to revel in what appear to be the final days of Queric.