Days Of Our Lives (DOOL) Spoilers: Kate Drops A Bombshell On Gabi And Jake DiMera 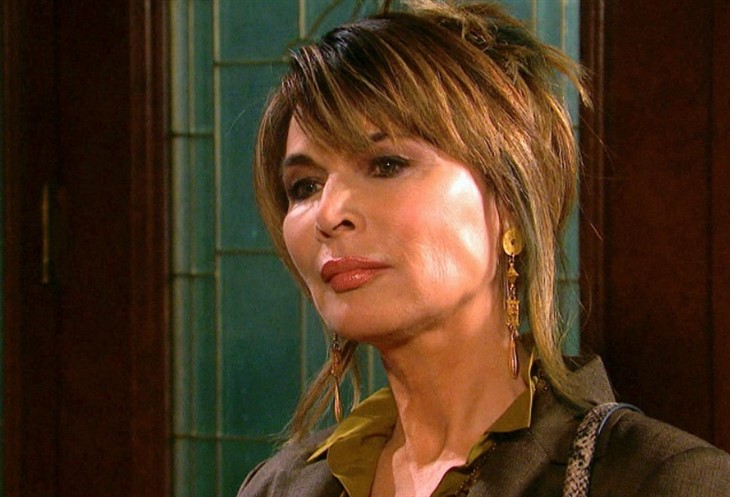 Days of Our Lives (DOOL) spoilers tease that Kate Roberts (Lauren Koslow) will drop a bombshell on Gabi Hernandez (Camila Banus) and Jake DiMera (Brandon Barash) in an upcoming episode of Days of Our Lives!

Days of Our Lives viewers will recall that Kate has been playing a revenge game with both Jake and Gabi, but in particular with Jake. Kate had crawled her way to the DiMera mansion after escaping Kristen DiMera’s (Stacy Haiduk) clutches, jumping out of her moving car after Kristen struck Brady Black’s (Eric Martsolf) car, injuring Brady! Kristen had impersonated her, dumped Jake, stuffed Kate in a duffel bag after drugging her, with the intention of shipping her to a Greek island, probably the same one she previously shipped a drugged Sarah Horton (Linsey Godfrey) to in a steamer trunk!

Days Of Our Lives (DOOL) Spoilers: Robert Scott Wilson Says Ben And Ciara To Have ‘Some Much-Earned Happiness’

But Jake jumped from Kate’s bed to Gabi’s in an instant – like he didn’t even care at all for Kate and that is what has her so angry and vengeful. And who can blame her? Jake had sworn his undying love to her although shortly before Kristen had kidnapped her he had admitted he was still attracted to Gabi, which Kate didn’t like at all! Plus, even though Kate has never been one to act her age or act like she’s felt it, there has to be a little bruising to her ego, considering she has children older than Gabi! But now, there is more at stake than just Kate’s bruised ego and her jealousy. As Days of Our Lives viewers will recall, there is also a board meeting coming up to discuss whether Jake, and Gabi with him, should be ousted from DiMera Enterprises!

Days of Our Lives viewers may have noticed that Kate’s been calling herself Kate DiMera instead of Kate Roberts, which others frequently call her. Technically, she would be Kate DiMera after having been widowed when Andre DiMera (Thaao Penghlis) died. She hasn’t remarried since although she’s been involved with more than one man since Andre died. That means she is a DiMera widow, as Gabi is, having been married to the late Stefan DiMera (Brandon Barash), Jake’s twin he never met. Days of Our Lives viewers may remember a few years ago when Stefan died and Chad DiMera (Billy Flynn) wasn’t even in the running for the “throne” since he had been working for Titan, and left with Abigail DiMera (then Kate Mansi) and the kids for Paris.

He had enough of Stefan and fled with his family long before Stefan died! Then, she and Gabi vied for the leadership of DiMera Enterprises as DiMera widows, since at the time there was a shortage of sons of Stefano DiMera (Joseph Mascolo) to step up. It is highly likely that Kate, who will later cast the deciding vote, will vote against Jake. But that won’t be the bombshell – there is something else that she has planned before the vote takes place. There is a good chance that this bombshell, which she will likely deliver at the board meeting and right before the deciding vote, will be coming clean! Kate will want Jake and Gabi also to suffer maximum embarrassment at the board meeting in addition to voting to oust Jake from DiMera and possibly Gabi from the DiMera mansion, and any rights she might still have as a DiMera widow!