The Bold And The Beautiful (B&B) Spoilers: Liam Returns To Hope Soon – Will Katie Be Lucky With Bill? 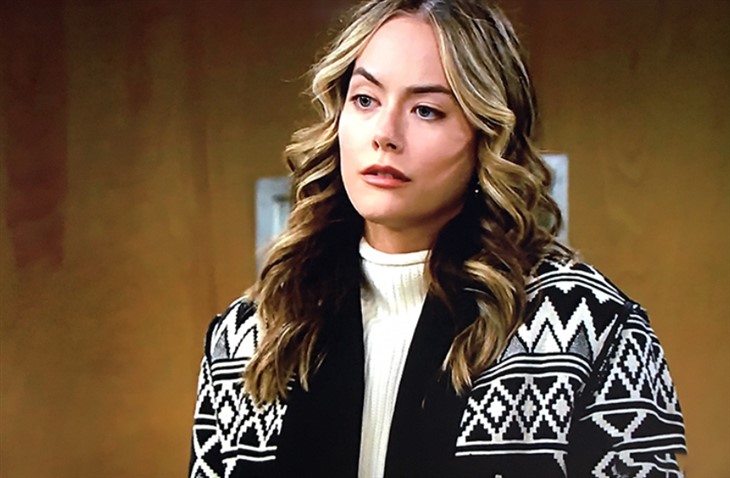 The Bold and the Beautiful (B&B) spoilers document that Hope Spencer (Annika Noelle) is closer to her hoped-for goal than she realizes. Despite Thomas Forrester’s (Matthew Atkinson) confined predicament through Justin Barber’s (Aaron Spears) betrayal hands, he should be able to eventually provide evidence that clears Liam Spencer (Scott Clifton).

However, Bill Spencer’s (Don Diamont) circumstances are starkly different. He wasn’t driving his sports car that accidentally hit Vincent Walker (Joe LoCicero). But Thomas’ intel won’t erase the evidence Bill destroyed and got rid of or clear him of not reporting the accident from the scene. That makes Katie Logan’s (Heather Tom) road much harder, as compared to Hope’s.

Deputy Chief Bradley Baker (Dan Martin) is sympathetic to Liam, especially when contrasted to Bill. Martin’s character couldn’t believe what Liam confessed, but later came to see the predicament Bill pushed him into.

Liam is the clear lesser criminal because he passed out at the scene. It was wrong for him to not have reported the accident. However, Liam never destroyed evidence or arranged for the car to be purchased by an overseas’ contact.

It’s reasonable to believe that the eventually revealed video, that shows Vinny admitting to framing Liam, will likely lead to some type of minimal jail sentence or probation.

Hope has endured many trials due to her love for Liam. But this event involves highly unusual circumstances.

As the fans, Thomas, and regrettably, Justin now know, Liam is the victim in this scenario. He was targeted by Vinny, who wanted to frame Liam as his killer so that Hope would be single and available for Thomas to be with.

The dedication of Noelle’s character to Liam should payoff in Lope’s bond deepening, especially because Steffy Forrester (Jacqueline MacInnes Wood) has created a family with John Finnegan (Tanner Novlan) and isn’t a threat, as she’s long been.

Bill is a lug. Yes, he acts in clumsy ways, to put it mildly.

The chaos that Bill’s actions forced into Will Spencer’s (Finnegan George) life caused Katie to have a painful conversation with Batie’s son. Bill’s public figure status made his incarceration an unavoidable issue, which Will is struggling to deal with.

Bill’s legal jeopardy is lessened by the fact that Liam was the target of a crime. Plus, the as yet unknown factor of Justin’s malpractice will play into Bill’s favor. Yet, he’s still guilty of committing crimes that must be punished.

So, Katie’s love for Bill might need to be expressed solely through the phone in the prison’s visitor’s room indefinitely.