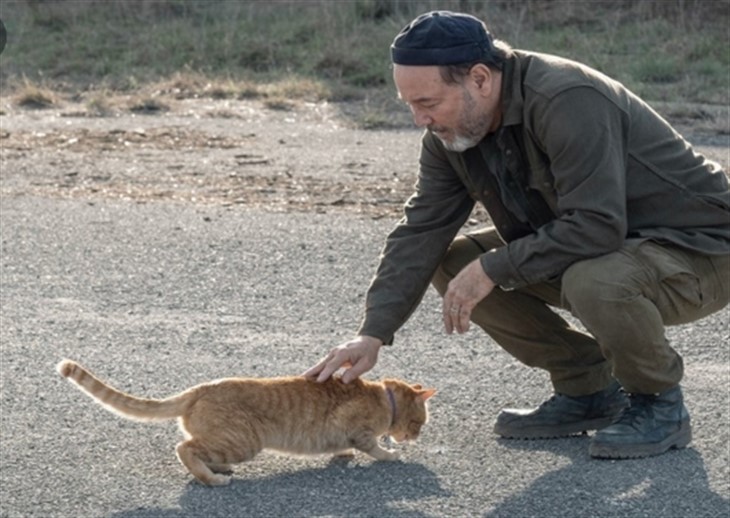 Fear the Walking Dead spoilers and updates tease that the show’s fan-favorite, the tabby cat Skidmark, is safe. This has been confirmed by showrunner Ian Goldberg during a stream with TWDUniverse on Twitch following season 6’s final episode.

Goldberg reassured fans by saying “Don’t worry, he didn’t wind up out in the bomb territory. So I hope that sets your mind at ease.” Victor Strand (Colman Domingo) reunited Skidmark with his owner Daniel Salazer (Ruben Blades) and revealed that the cat was on pest patrol duties at a bowling alley that was infested with rats.

He said he understands viewers’ concern over the fates of the animal survivors in the series. Goldberg also revealed that Rufus, the former bounty hunter bloodhound, is safe after finding cover inside an open vehicle close to the beached submarine where Morgan (Lennie James) Grace (Karen David) reunited with Baby Morgan during the last few scenes of the season finale.

Daniel And Friends Survive The Bombs

Daniel survived the bombs after escaping with other friends including Luciana (Danay Garcia) aboard a helicopter that was piloted by Isabelle (Sydney Lemmon) and sent by Althea (Maggie Grace).

During the stream with TWDUniverse, Goldberg also dropped a photo that shows what happened after the explosive season 6 finale.

Fans may recall that the last episode, titled The Beginning, ended with massive death and destruction after cult leader Teddy (John Glover) fired a missile with ten nuclear warheads across Texas.

Goldberg revealed a few details for the upcoming season 7. He said the missile’s detonation managed to blow up this area of Texas, which will be a new reality that the series’ characters will have to face.

“We’ve seen them grow very formidable and able with how they’ve navigated the apocalypse for these six seasons. And now it is a whole new game with the apocalypse,” he teased.

In season 7, Morgan, Grace, and their adopted daughter Morgan will have to deal with the aftermath of the explosion. They’ll be dealing with a lot of problems including the unbreathable air, limited resources, and other environmental factors. This new and scary reality will bring out different sides to all the characters who have survived.