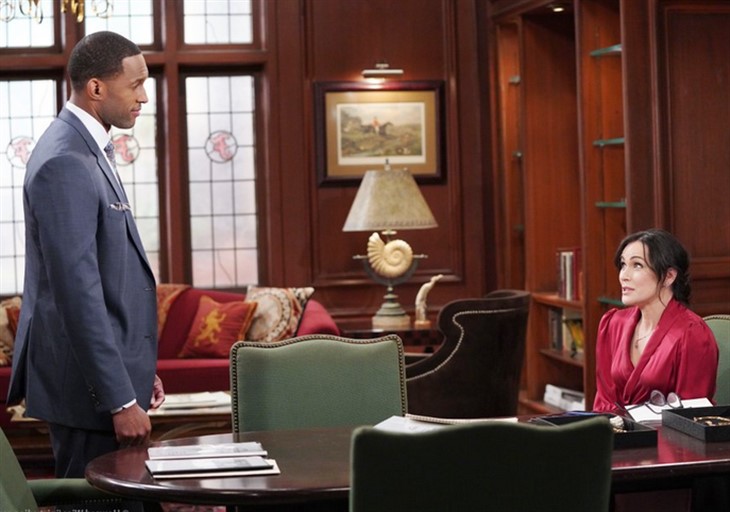 The Bold and the Beautiful (B&B) spoilers for the next two weeks, June 28 to July 9, reveal that soapilicious secrets explode at the worst possible moment, and one of the three LA prisoners could make a break for it.

The Bold And The Beautiful Spoilers – A Birth is Announced

Steffy Forrester (Jacqueline MacInnes Wood) gives birth! She has a midwife named Joanne (Christina Carlisi), as well as her private physician/partner John “Finn” Finnegan (Tanner Novlan) to give a girl a hand.

It’s a boy for Sinn and soon the whole family is celebrating including proud grandpa Ridge Forrester (Thorsten Kaye). But where is Thomas Forrester (Matthew Atkinson) in all the excitement?

Thomas is caged like a zoo animal, courtesy of rogue lawyer Justin (Aaron D. Spears). Thomas is one smart cookie and he’s working on an escape plan. Will it be more playing armchair shrink to Justin’s hurt ego? Or is there a crowbar hidden in the corner?

Elsewhere Donna Logan (Jennifer Gareis) shows up to tell sis Katie Logan (Heather Tom) that the fam can lean on her while Bill Spencer (Don Diamont) is behind bars. But Donna always has some pot bubbling on the stove and she ends up blurting out that she’s still in love with Eric Forrester (John McCook)!

Ruthless Quinn threatens Paris and Brook Forrester (Katherine Kelly Lang) overhears. Later she puts the squeeze on poor Paris who squeals all to the blond bombshell.

Does Brooke pipe up with her reason why Eric and Quinn should not marry? You bet she does!
Chaos ensues when Brooke and Quinn try to convince Eric of the real truth but explosive show spoilers reveal he sees the light and sets fire to the Quinn portrait on the wall. Ok that last part we made up, but he does see the light!

The Bold and the Beautiful (B&B) Spoilers: Bill Recognizes Something Is Off – Justin’s Plan Falling Aparthttps://t.co/pB0FPDVc5p

Meanwhile Justin Barber keeps putting his feet up on Dollar Bill’s pristine desk. You know what they say, pride goeth before a fall.

Wyatt Spencer (Darin Brooks) actually gets a clue this time and starts to think something just isn’t right! Will this get him tossed into the cage along with Thomas?

B&B spoilers suggest Wyatt might go to Bill and Liam Spencer (Scott Clifton) with his suspicions.