General Hospital (GH) Spoilers: Brook Lynn And Maxie Have A Showdown Over Louise/Bailey? 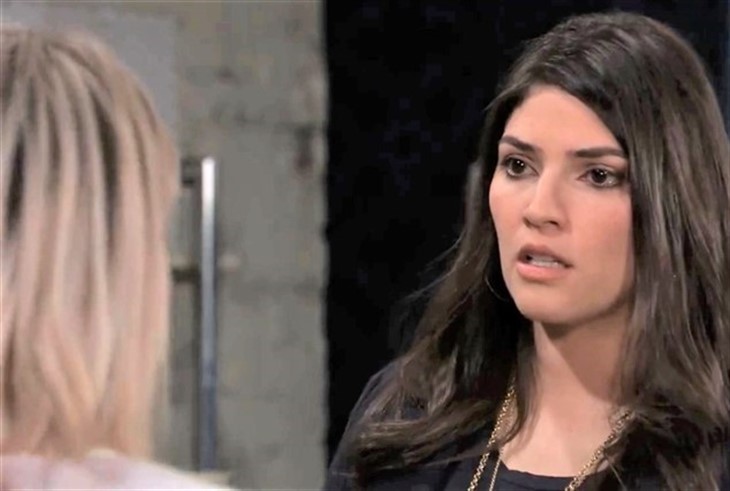 General Hospital (GH) spoilers tease that Brook Lynn Quartermaine (Amanda Setton) and Maxie Jones (Kirsten Storms) will get into a confrontation over baby “Bailey Lois Quartermaine” aka Louise August (Harper and Scarlett Bloom) in an upcoming episode of General Hospital!

General Hospital viewers will remember that Maxie has already visited the baby too much, and there have been some close calls. The two of them can certainly not speak freely at the Quartermaine mansion, and it is difficult to arrange to meet somewhere private. General Hospital viewers can imagine how difficult that could be for the two women to coordinate visits – Willow Tait Chase (Katelyn MacMullen) lives in the gatehouse, and the Quartermaine mansion is full of family.

General Hospital (GH) Spoilers: Chase Paralyzed – Incomplete Healing, Side Effect, Or Something Else?

There are Ned and Olivia Quartermaine, (Wally Kurth, Lisa LoCicero). Valentin Cassadine, (James Patrick Stuart) who thinks he is “Bailey’s” birth father lives there along with his daughter Charlotte Cassadine (Scarlett Fernandez). Dante Falconeri (Dominic Zamprogna) lives there. His son, Rocco Falconeri (O’Neill Monahan) lives there along with several other children of the family – Samantha McCall’s (Kelly Monaco) children, Danny Morgan (Porter Fasullo) and Emily “Scout” Cain (Ella Ramacieri) as well as Leo Falconeri (Aaron Bradshaw). Then there is Monica Quartermaine (Leslie Charleson) and Michael Corinthos (Chad Duell)! Soon there may be one more if Harrison Chase (Josh Swickard) moves into the gatehouse with Willow! Those are way too many ears and eyes that could find out that “Bailey” is really Louise!

GH Spoilers – Maxie Jones’ Apartment Is Definitely Not Safe For Brook Lynn Quartermaine To Bring The Baby To Her, She Shows Up At The Quartermaine Mansion Again

General Hospital viewers will concede that Maxie’s apartment is definitely not safe for Brook Lynn to bring “Bailey” to her for visits. No one except Dr. Hamilton Finn (Michael Easton) and Nurse Elizabeth Baldwin (Rebecca Herbst) know Peter August (Wes Ramsey) is dead, with the possible exception of Scott Baldwin (Kin Shriner). General Hospital viewers will recall that Finn has had a crisis of conscience, and was planning to turn himself in. Scott advised him to do what was best for his family, and Elizabeth tried to talk Finn out of it.

Finn may not have even gotten around to giving Scotty the details, and even if he did, he’s not the only one to throw someone down resulting in his death – Peter’s fall could very well be spun as an accident resulting from a scuffle at the top of the stairs. Scott accidentally killed a doctor in Switzerland while defending Liesl Obrecht’s (Kathleen Gati) honor from the dastardly Dr. Warren Kirk (Jamison Jones) who had become obsessed with Liesl. In a very similar situation, Scotty had grabbed Kirk and thrown him off of Liesl, and he hit his head on a corner of a table going down and it killed him.

Scotty has covered up a few dead bodies for close friends and lovers in his time, so if Scotty does know about Peter, he won’t tell. Meanwhile, back at the Quartermaine mansion, Maxie has shown up again to visit the baby. Brook Lynn tells her even though the two of them have seemed to have become very friendly, there are too many chances for their “agreement” over the baby to be discovered! Besides, what if Peter is looking for Maxie and has spies following her? Just because Dante lives there and perhaps Chase as well, it doesn’t mean it’s the Corinthos compound! Peter’s spies could bring danger to the Quartermaine mansion and everyone there if they followed Maxie! Dante would back Brook Lynn up on that!