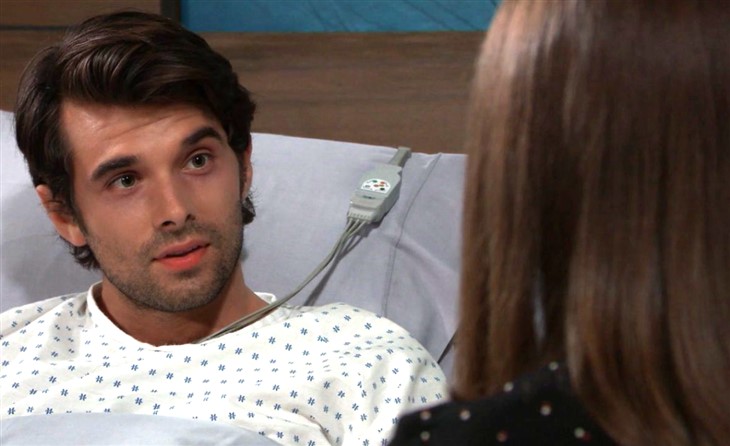 General Hospital (GH) spoilers tease that Michael Corinthos (Chad Duell) will try to make sense out of a confusing situation in an upcoming episode of General Hospital. Might Harrison Chase (Josh Swickard) move into the gatehouse with Willow Tait (Katelyn MacMullen)?

General Hospital viewers will remember that Willow married Chase on what was thought to be his deathbed. Willow thought she was granting the last wish of a dying man, as did Michael. Dr. Hamilton Finn (Michael Easton) had come on with a Trojan horse antidote using his and Jackie Templeton’s (Kim Delaney) DNA, and it nearly killed Chase. He flatlined, but then when Cyrus Renault (Jeff Kober) came down on the elevator flanked by FBI agents taking him to a federal prison in the midwest, likely Leavenworth, Cyrus taunted Finn over Chase’s condition.

Finn then realized Cyrus had tampered with the paternity tests and rushed to formulate another Trojan horse antidote with Jackie’s and Gregory Chase’s (Gregory Harrison) DNA – and it worked! But by that time, Willow and Chase were legally married! General Hospital viewers will also remember that Chase’s legs had atrophied and he is at the best, temporarily paralyzed from the waist down.

But he is determined to get his feeling and his abilities back fully, and plans to undergo a rigorous regimen of physical therapy to do so. However, Chase is going to need some help for a few months at least, and his apartment is not handicap equipped. It may also be on a second or third floor accessed by stairs. The gatehouse on the Quartermaine property, on the other hand, is on ground level.

GH Spoilers – How Will Michael Corinthos And Willow Tait Carry On Their Relationship?

A huge question for Michael and Willow, as General Hospital viewers might imagine, is how will Michael and Willow carry on their relationship with Chase living in the gatehouse? Everything is confusing as long as Willow doesn’t tell Chase the truth, and she cannot bear to break his heart, especially with him trying to heal. Michael and Willow both know that Willow has become Chase’s whole reason for living, as well as his motivation to heal and to complete his physical therapy.

Willow was going to tell him the truth long before, but as General Hospital viewers will recall, that was the day he collapsed from the toxin supplied by Peter August (Wes Ramsey) that was actually meant for Finn. The Chase family had gotten together for a family meal at Beradino’s, and played a family game – kind of like a Wheel of Fortune with beverages, in this case, coffee. Chase wound up the winner of the wheel of misfortune, having consumed the tainted coffee.

Another question is what about Wiley Corinthos (Erik and Theodore Olson)? He has already been confused over a grandmother who isn’t Willow’s mother, will he think he has two daddies now in Chase and Michael? It is a confusing situation indeed, for everyone concerned – except Chase, who is totally in the dark! Michael and Willow have to pretend, but how long will they be able to?