Days Of Our Lives (DOOL) Spoilers: Eli Keeps A Secret From Lani – Chanel Caught Him With His Pants Down Again! 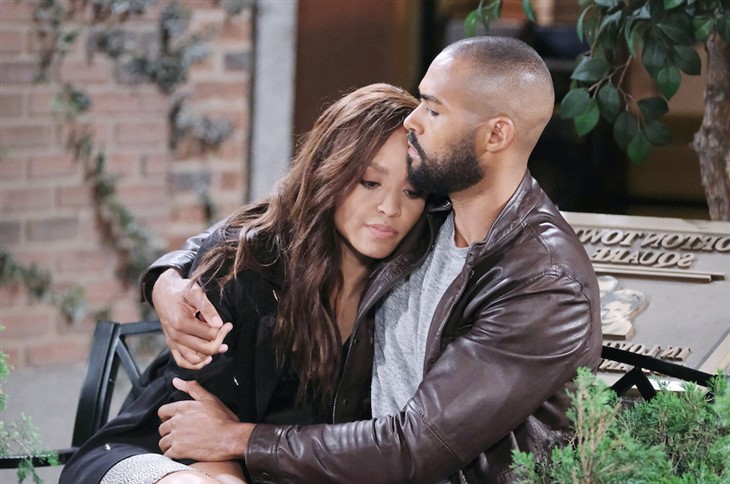 Days of Our Lives spoilers tease that Eli Grant (Lamon Archey) will keep a secret from Lani Grant (Sal Stowers) in an upcoming episode of Days of Our Lives. It seems that Chanel Dupree (Precious Way) has caught him with his pants down again!

Days Of Our Lives Spoilers – Is It By Accident, Or By Plan? Lani Grant Would Wonder If Her Cousin’s Stalking Her Man!

Days of Our Lives viewers will recall that Chanel has caught Eli coming out of the shower in a towel and losing said towel at least once previously on Days of Our Lives, but now she catches him again with his pants down. Worse yet, every time she catches him it is usually with no pants at all! It’s embarrassing – how does he manage to have such terrible timing? Eli’s just not a bathrobe kind of guy, and this time Chanel catches him changing clothes and no bottoms on!

This makes how many times she’s seen him naked – how does she manage to show up unexpectedly when he’s naked?! Eli decides not to tell Lani because it would just upset her. But something needs to be done. Even when Chanel is not supposed to be home, there she is, and he’s blindsided! Eli really thought once she and Allie Horton (Lindsay Arnold) got their bakery in the works – even though the official grand opening has not taken place yet – that she would be too busy developing recipes and getting their business plan down.

These surprise appearances – or should that be shocking appearances – should have either stopped or at least slowed down! Eli knows that Lani might suspect that Chanel is stalking him to get a peek, but he doesn’t want to tell his wife that her cousin is a peeping Thomasina!

Days of Our Lives viewers will recall it’s been right around a year that Eli and Lani finally got married, after many struggles. Eli and Chanel do have a secret with each other, but it’s not about her always coming in on him when he’s naked! Eli asked Chanel to help him plan a surprise for Lani for their anniversary – and decided to make a big bakery order from Chanel and Allie’s new bakery.

He wants Chanel to make all the treats for the party – Alice Horton’s (Frances Reid) doughnuts, an anniversary cake, cookies and other appetizers, the works! Eli wants to make sure that Lani has a special first anniversary, and he hopes that the optical intrusions will slow down or disappear with his bakery orders making her really, really busy. Days of Our Lives viewers will remember that Chanel and Allie’s first batch of Alice’s doughnuts were even Julie Williams (Susan Seaforth Hayes) approved, and so they should be a big hit.

Chanel has gone out for the day working with Allie to get the bakery kitchen ready for use – it was a huge and expensive remodel that her mother, Paulina Price (Jackée Harry) had to set up to make the old Gabi Chic storefront into a bakery!

Chanel has been gone for nearly an hour when Eli decides it’s safe to shower, change his clothes, and get ready for his day, the twins’ care having been provided for. But it’s not five minutes after he comes out, and just has put his undershirt on and nothing else, that again Chanel comes home and catches him with his pants down, ready to pull them up! Does he have to put cameras in the hallway and a security system?