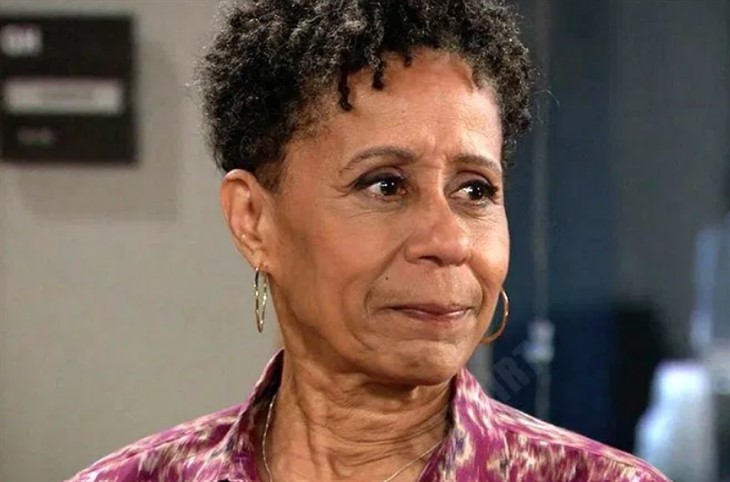 Vernee Watson, who plays Stella Henry left Port Charles for the time being when her General Hospital nephew Curtis Ashford (Donnell Turner) was sufficiently recovered to be discharged from General Hospital. Viewers will recall that he was shot by Cyrus Renault (Jeff Kober) who was holding Laura Collins (Genie Francis) and Portia Robinson (Brook Kerr) in Portia’s house. Laura had already convinced her ne’er do well half-brother to let her take Trina Robinson’s (Sydney Mikayla) place.

Trina ran into the arms of her father, Marcus Taggert (Réal Andrews). Curtis, playing the hero, had snuck into the house through an open window and shot at the already wounded Renault as he was about to shoot Laura, but then he was shot. Of course, his Auntie Stella rushed to his side, and once he was released convinced him to take her place down on Charles Street, telling him she was returning to London.

However, she also told him she would be back after tying up some loose ends. Vernee Watson recurs on General Hospital and also appears on the primetime television program “Bob Hearts Abishola.” Jeff Kober, who played Cyrus Renault, also exited recently when Curtis’ soon to be ex-wife, Port Charles Police Commissioner Jordan Ashford (Briana Nicole Henry) informed Cyrus, still in his hospital bed that he was being transferred to the infirmary of a federal prison in the Midwest. Armed FBI agents were there to make the transfer.

Lucas left Brad when the truth came out after a year and a half. Perry will pop in on July 1, as Britt Westbourne (Kelly Thiebaud) pops in to visit him in Pentonville Prison for support. Brad pled guilty and is sentenced to from 15 to 40 years. General Hospital viewers will recall that Britt and Brad have always been good friends, although they won’t be able to watch Golden Girls and pig out on ice cream this visit!

On June 28, Carolyn Hennesy will again make an appearance as Attorney Diane Miller. She is likely to show up to advise Carly Corinthos (Laura Wright) and Jason Morgan (Steve Burton) on legal matters regarding the destruction of the Corinthos Coffee warehouse at Pier 55 by the Novak crime family.