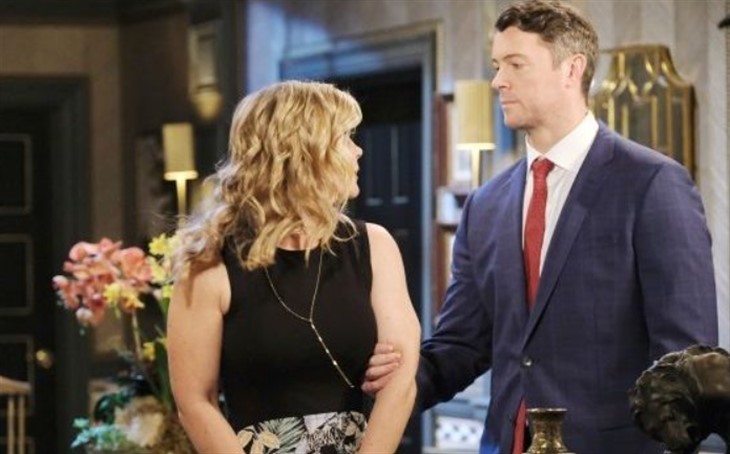 Days of Our Lives (DOOL) spoilers tease that for now Sami Brady (Allison Sweeney) believes that her secrets are safe. Even though Kristen DiMera (Stacey Haiduk) found out about Sami’s affair with Lucas Horton (Bryan Datillo), and was blackmailing her with the information, Sami believes that since Kristin in on the run from the police, that she won’t risk trying to contact EJ DIMera (Dan Feuerriegal) to tell her brother that his wife cheated on him.

But while it may be too dangerous for them to speak on the phone, Kristen has another plan up her sleeve. She has written a letter to EJ which most likely spills the beans.

Days Of Our Lives (DOOL) Spoilers: Eli Keeps A Secret From Lani – Chanel Caught Him With His Pants Down Again!

Days Of Our Lives Spoilers – EJ DiMera And Sami DiMera Are living In The DiMera Mansion!

Sami really wants to work on her marriage to EJ. As viewers will recall, Sami found EJ who had been believed to be dead for several years. But during the rescue attempt, EJ was severely burned over most of his body and the recovery was slow and painful. During that time, he pushed Sami away even though she was caring for him during the recovery. So when Sami returned to Salem alone to take care of a family matter, she ended up in bed with her ex, Lucas. She didn’t regret the close moment with Lucas, but insisted that she wanted to make he marriage work.

DOOL Spoilers – Kristin DiMera Was Out Of control!

But unfortunately, Kristen found out about the affair and blackmailed Sami and Lucas. The exes had no choice but to help Kristen with her plans to keep Brady Black (Eric Martsolf) and Chloe Lane (Nadia Bjorlin) away from each other. Enraged when they ultimately failed, Kristen locked them up in the wine cellar at the mansion where they made love once again. They were eventually freed and Kristen was forced to go on the run, but she still wants to make Sami pay as well as inform her brother that his wife committed adultery. From an undisclosed location, Kristen wrote a letter to her brother. But will EJ get the letter?

It seems unlikely that EJ will get his sister’s letter, at least at first. The most likely scenario will be that Sami will find the letter before EJ gets a chance to read it. She will most likely intend to destroy it. But before she get the chance, look for the damning evidence to go missing. It will probably change hands many times with Sami searching desperately before it finally arrives in EJ’s hands. But once it does, look for all hell to break loose in the DiMera mansion!

Will Kristen’s letter get to EJ? Or will it go through several Salem resident’s hands? Or will Sami be able to destroy and save her marriage? If EJ finds out the truth, what will happen to Sami and Lucas? Secrets don’t stay buried for long in Salem, so stay tuned to Days of our Lives, airing weekdays on NBC. And don’t forget to check back right here regularly for all your Days of Our Lives news, information and spoilers.