The Bold And The Beautiful (B&B) Spoilers: Who Will Find Thomas Forrester? Vote Now! 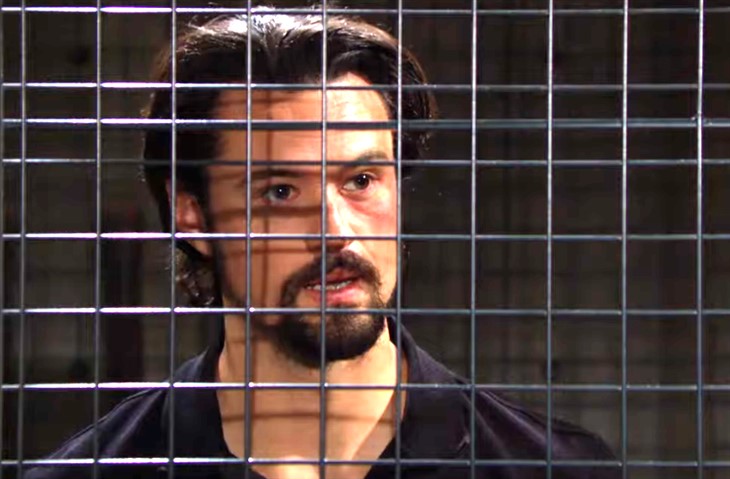 The Bold and the Beautiful (B&B) spoilers and updates reveals Thomas Forrester (Matthew Atkinson) knows the tragic truth about his friend Vincent Walker (Joe LoCicero). Recently Thomas needed to get help with his cell phone. Zende Forrester Dominguez (Delon de Metz) helped Thomas to access his messages. Thomas found that Vinny had been trying to contact him.

Vinny wanted to make amends to Thomas for altering the paternity test that showed that Liam Spencer (Scott Clifton) was the father of Steffy Forrester’s (Jacqueline MacInnes Wood) baby. Thomas had found out that Dr. John Finnegan (Tanner Novlan) was really the father of Steffy’s baby and told everyone about it. Vinny had hoped that Thomas would be able to be with Hope Spencer (Annika Noelle) if she and Liam were not together. Thomas had been shutting Vinny out of his life and was sadden to see that Vinny had been sending him messages.

However Thomas was shocked and devastated when he viewed the final message that Vinny sent him. Vinny sent a video to Thomas which showed him stepping in front of a car. The car was being driven by Liam who hit Vinny. Bill Spencer (Don Diamont) was with Liam and started to cover up the situation because he thought that the authorities would believe that Liam had wanted to kill Vinny over the paternity test. Thomas wanted to give the video to Bill and Liam’s lawyer Justin Barber (Aaron D. Spears). He believed that Justin would want to help Bill and Liam. However Justin has a reason to want to make sure that Bill and Liam are not set free. Justin knocked out Thomas and has put him in a cage in a storage area at Spencer Publications. Thomas is trying to get Justin to let him go to the authorities but Justin wants to take over Spencer Publications from Bill. Thomas is now trapped and cannot help Bill and Liam.

Wyatt Spencer (Darin Brooks) does not know that Justin wants to take over his family company. Wyatt believes that Justin is trying to help Bill and Liam. Bill wants Wyatt to take over Spencer while he is in jail. However Justin told Bill that he can run the company. Wyatt may find that he is going to have trouble with Justin in regards to Spencer Publications. Justin may try to get Wyatt to leave Spencer Publications. Wyatt may need to get his possessions together and need to have something to take them with him. Wyatt may come across the storage area that Thomas is in. Wyatt may need his fiancé Flo Logan (Katrina Bowden) to help him to move out of Spencer Publications instead. He may need her to find something to put his belongings in. Flo may go to the storage area and find Thomas. She could go to Wyatt to get help for Thomas. Flo and Wyatt could help set Thomas free.

Thomas has told Hope that he will help her while Liam is in jail. Liam asked Thomas to help Hope while his is away from her. Hope may start to worry about Thomas and want to find him. She may go to Spencer Publications to look for him. She knows that Thomas had business with Bill that he needed to take care of at Spencer Publications before. She may find that Justin has taken over Spencer Publications. Justin may get Hope to take some of Liam possessions with her. Hope may find Thomas in the storage area when she looks for something to take Liam’s possessions with her.

The Bold And The Beautiful Spoilers: Eric And Quinn's Marriage Implodes, Making Room For A Donna Reunion #bb #BoldandBeautiulhttps://t.co/s3eFcB8KX7

Bold and the Beautiful Thomas needs someone to find him. He wants to do what is right. He wants to help Liam and Bill to get their freedom. However Justin has decided that he does not want to help Bill or his sons. Justin feels that Bill has not shown him the respect that he believes that he deserves for helping him with his different problems over the years. Justin believes that he helped to make Spencer Publications a successful company. Can Thomas convince Justin to let him go so that he can help Liam and Bill? Will someone find Thomas if Justin does not let him go? Tune into Bold and the Beautiful to find out if someone will find Thomas and set him free to help Liam and Bill.