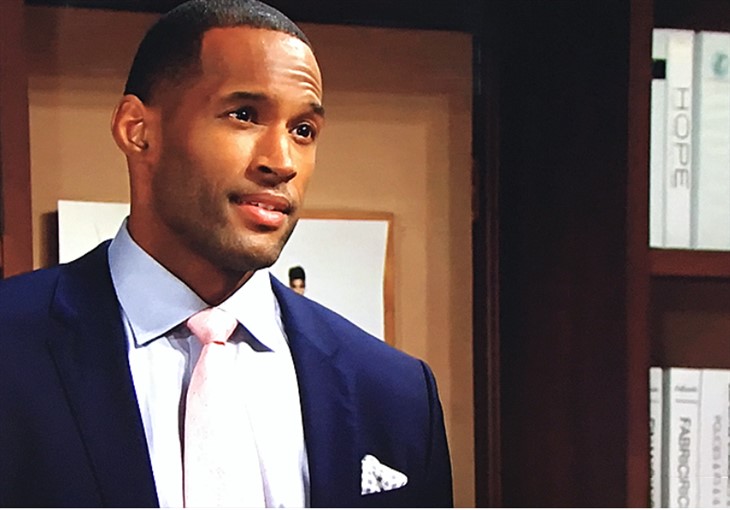 The Bold and the Beautiful spoilers document that Carter Walton (Lawrence Saint-Victor) is currently Forrester Creations’ Chief Operating Officer and he is a member of the iconic fashion house’s Board of Directors. His personal life feels back on track, as Zoe Buckingham (Kiara Barnes) is wearing the bling engagement ring again.

Meanwhile, Quinn Fuller Forrester (Rena Sofer) smiles at Eric Forrester (John McCook) broadly. She had the unmitigated arrogance to ask her husband to renew Queric’s vows. He didn’t know that Quinn was appeasing her guilt in doing so and said yes.

How would a one-time drink server on the strip in Las Vegas, Nevada, wind up living in opulence in Los Angeles, California? Well, Quinn did through the boldness of her persona.

The Bold And The Beautiful (B&B) Spoilers: Heartbroken Zoe Leaves Town After Learning Of Carter And Quinn’s Affair

Eric recently said that he is still enchanted by Quinn. That’s the beginning and middle of the answer as to why Queric began and endured.

But fans see the end coming hard. Quinn’s outright reckless behavior will be outed in daytime in a matter of episodes, with those who’ve been waiting for her crash waiting impatiently.

Carter has free will. So, Zoe is not responsible for the actions he took with Quinn.

However, it is fair to say that Zoe scrambled Carter’s brain. Her pursuit of Zende Forrester Dominguez (Delon de Metz) was foolish, as whatever that was could only be defined as a surface crush.

So, when Carter was provoked, when learning about Zoe’s betrayal of trust, he was vulnerable. And there was Quinn, who claimed vulnerability herself. In fact, she was just impatient, like the viewers who want to see Eric divorce her in July.

There’s a man who truly demonstrates putting forgiveness into practice in one’s daily life. He offered Quinn a number of chances to improve herself and it did seem like she was making progress until the Quarter incidents happened.

The Bold and the Beautiful (B&B) Spoilers: Paris and Brooke Team Up To Expose Quinn?https://t.co/panexFwjWZ

Regret is something Quinn will surely feel once the vow renewal leads into emotional upheaval, excuses, crying, shouting, and then, finally, the acceptance of defeat. Her life could have rolled smoothly for an indefinite period of time. But Quinn has no decency or sense of discipline and so the life she incredibly achieved is about to be over.