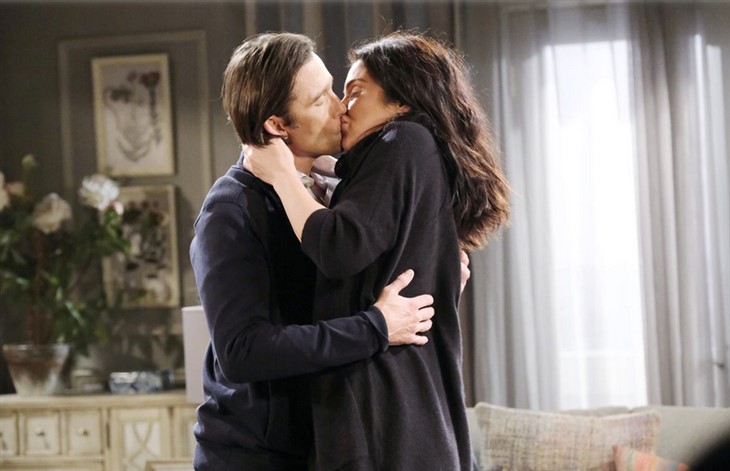 Days of Our Lives (DOOL) spoilers reveal that Chloe Lane (Nadia Bjorlin) takes Belle Brady’s (Martha Madison) advice. She picks Philip Kiriakias, but it has nothing to do with her feelings. She believes Brady Black (Eric Martsolf) needs time after breaking up with Kristen DiMera (Stacy Haiduk). Brady tries to prove he’s ready for love by giving her an unforgettable kiss.

DOOL spoilers reveal that Chloe admitted she had feelings for Brady. He hesitated to tell him because he was still with Kristen. She told Susan Banks (also played by Haiduk), unaware that it was really Kristen in disguise. “Susan” told Brady about Chloe’s admission, which led to him distancing himself from her.

Eventually, the truth came out about “Susan” and Brady ended his relationship. Brady and Chloe didn’t have the chance to act on their feelings, though. A lot of chaos and drama took place. She has a crush on Philip now but it could just be because he saved her life.

Chloe remains torn between the two men. She doesn’t want to drag out her decision because it wouldn’t be fair to either of them. She also knows that things are already pretty tense between the two. Prolonging the love triangle will only intensify their battle, which she doesn’t want.

Chloe will confide in Belle and ask for her advice. As much as she loves her brother, Belle says that Brady has a lot of baggage. She also brings up that it hasn’t been that long since he broke up with Kristen. She believes that Brady needs some time alone. As for Philip, Belle thinks that Chloe should give him a chance and see what comes of it.

Days of Our Lives spoilers reveal that Philip will be thrilled that he gets another chance with Chloe. However, Brady is confused and disappointed. He likely asks why Chloe didn’t pick him despite them having romantic feelings for each other. Chloe will be honest and tell him that he needs time to get over Kristen. She wants a relationship, not a rebound. She has to be sure that he’s ready.

Brady decides to show Chloe that she’s wrong and he is ready for love. During the week of July 5, Brady pulls her quick and close. The two have a passionate kiss that will leave Chloe breathless. Could that kiss actually prove to her that Brady is ready for love again? If so, how does she break the news to Philip?

It is teased that Brady and Chloe will face more obstacles. Kristen tries reaching out to Brady but that won’t be her only move. When Kristen left Salem, she said that it wasn’t over between her and Brady. So, we imagine that she is still delusional, as well as dangerous and unpredictable. If Kristen comes for Brady, she will likely want her daughter too. If she sees Chloe anywhere near Brady or Rachel, it could quickly turn into a deadly situation.

With that being said, it was teased that once Brady and Chloe survive their upcoming Kristen nightmare, they will have a slow-burn romance. In the end, the soap plans on making them Salem’s next supercouple.