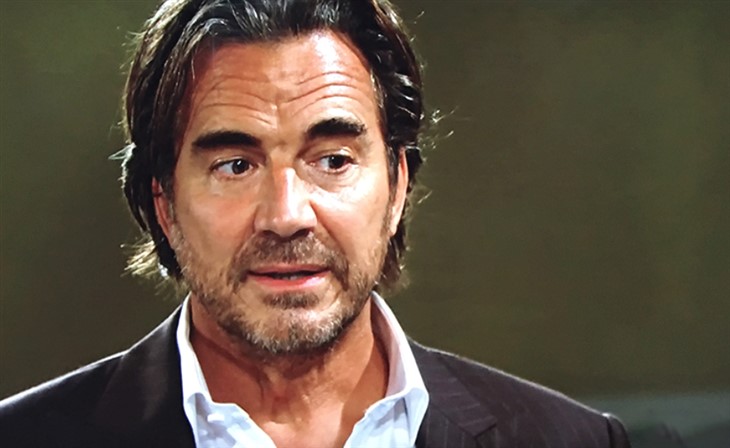 As fans know, Justin Barber (Aaron Spears) has Thomas locked up in the basement where Spencer Publications is based. That forced confinement happened after Justin learned that Thomas had evidence that can clear Liam Spencer (Scott Clifton) and likely help Bill Spencer (Don Diamont) to get off as well.

The Bold And The Beautiful Spoilers – Search For Thomas Forrester Results In Rescue?

Ridge would not be inclined to search for Thomas in the building where Bill’s company is located. So, it seems likely that Kaye’s character will make a series of calls and conduct his own initial investigation.

However, the birth of Steffy Forrester (Jacqueline MacInnes Wood) and John Finnegan’s (Tanner Novlan) son will further concern in Thomas’ regard when Atkinson’s character doesn’t reappear. That will be a clear warning sign that something is wrong.

A rescue effort would seem most likely to involve the maintenance staff in the building where Thomas is being held captive. But if no accidental efforts take place, then Thomas will need to escape.

Ridge will be inclined to think that Vincent Walker’s (Joe LoCicero) recent death is linked to Thomas’ disappearance. He’ll try to rationalize his son needing some time to grieve and process what happened to his childhood friend.

What Ridge won’t know is that Vinny’s death is linked to Thomas’ absence in a life-threatening way. Justin didn’t anticipate happening upon Thomas at Forrester Creations. But action needed to be taken when he did and then learned about Vinny’s confession video.

Thomas has been trying in vain to make Justin believe that he doesn’t have to follow through with the panic plan to keep him hostage. However, Justin has stated that Thomas isn’t getting out of there.

Recent retrospective scenes were shown that focused on the connection Bill and Justin had through the years. Devoted soap fans know that’s the wink which tells them Spears’ character is likely not long for the show.

Thomas will need to overpower Justin when he’s likely been fed. He could also fake a sudden illness, with Justin being lured into the cage. Alternatively, Thomas could find a way out.

It appears as though B&B has set up Thomas to play the hero, as he will either be rescued or escape Justin’s clutches. Then, he’ll provide evidence to the authorities that helps to clear Liam and probably Bill as well, while also holding Justin accountable. Of course, that assumes Justin doesn’t escape or end up like Vinny.

Here’s hoping that Justin comes to his senses. Maybe if that happens Spears’ character can be redeemed and return to B&B again someday.