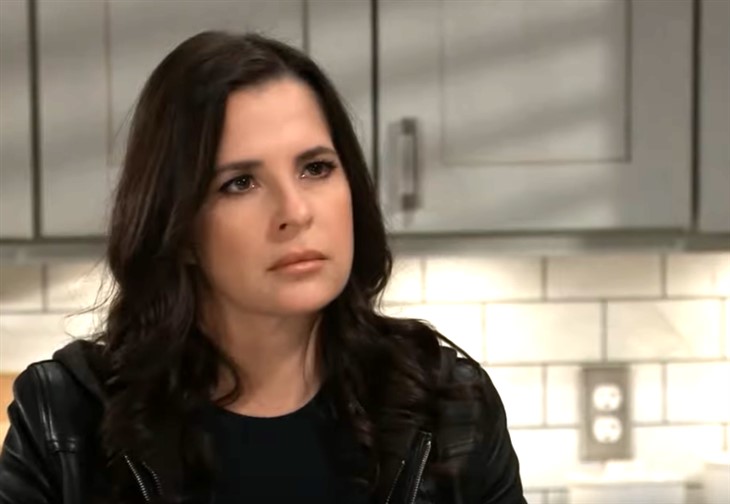 General Hospital (GH) spoilers indicate that Jason Morgan (Steve Burton) is about to marry Carly Corinthos (Laura Wright). However, Jason has recently started a relationship with Britt Westbourne (Kelly Thiebaud) as well. Unfortunately, it seems that writers have totally forgotten about Jason’s ex-wife, Sam McCall (Kelly Monaco). No matter who Jason is with, they will be about Sam’s son, Danny Morgan (Porter Fascullo). Why does Sam know nothing about any of these events?

General Hospital’s Sam has been the only woman to accept Jason for who he is from the start. Sam and Jason have been a huge part of each other’s lives since 2004. Jason was ready to help Sam raise her daughter with Sonny Corinthos (Maurice Benard) back then. Sam and Jason were married when he was kidnapped years ago and held hostage in a Russian clinic. However, current writers act as if Sam was never an important part of Jason’s life. Jason is never seen talking to Sam about their son anymore. Jason never keeps Sam abreast of things going on in his life. Why has Sam been completely removed from Jason’s life?

GH Spoilers – Sam McCall Wants Her Kids To Be Safe

Let’s be honest, General Hospital’s Sam McCall wants her kids to be safe but Jason has come under attack. It is obvious that not only Carly’s family is in danger from the Novak’s, so is Jason’s. As Jason’s ex-wife, Sam and her children could easily become targets in this mob war. Why is Jason out running around doing damage control and yet not bothering to warn Sam of the danger that she and her kids are in? Jason seems more concerned with half of Port Charles than he does his children. Why are the writers making light of the longest relationship Jason ever had?

General Hospital Spoilers – Are The Actors The Problem?

Rumors have swirled for some time that Steve and Kelly don’t want to work together. However is this any reason to make Jason a deadbeat father? Jason is being written worse than Lucky Spencer (ex-Jonathan Jackson). No matter how much these writers try, they cannot erase the history between Sam and Jason, and fans are fed up with their attempt to do so. Sam is important to Jason no matter their relationship status at this time. So why is Sam absent from anything in Jason’s life?

Why is Jason not trying to take care of his son and his mother? Why are Carly and Britt suddenly the most important people in his life? Jason and Sam did not break up because they didn’t love each other, they broke up for the safety of the children. Jason would never move on this quickly or ignore Sam’s feelings when getting into a new relationship. The writing for Jason needs to reflect that man he is and always has been and this man is just not him.

Jason needs to get his priorities straight and take care of his loved ones first. Stop trying to erase Sam and her memory from Jason’s mind and get the man back where he belongs. Perhaps Sam’s rumored blasting of Jason over his decisions is more than deserved.