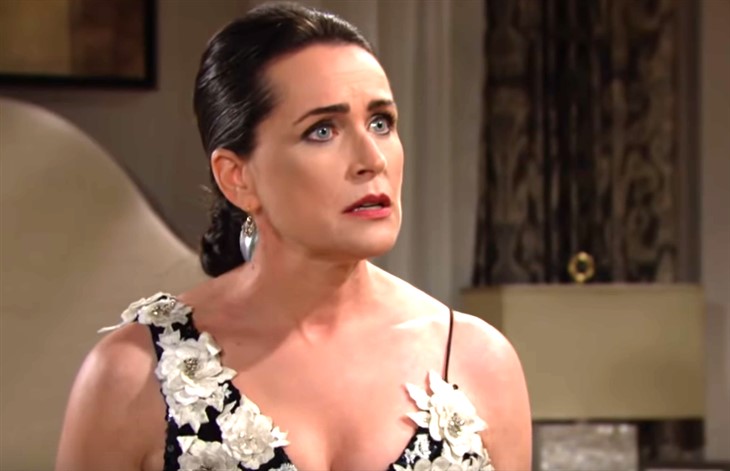 The Bold and the Beautiful spoilers document that Quinn Fuller Forrester (Rena Sofer) let her guard down when Paris Buckingham (Diamond White) entered her bedroom just prior to the Queric vow renewal ceremony. Telling White’s character to shut up and citing her idealism underscored Quinn’s shot nerves.

Paris is just out of college and is working her first real job. Her views of how the world should be do reflect those that many people in her age range express, as was also true of past generations of other younger B&B characters. However, Paris didn’t break her marriage vows, Quinn did. That’s realism.

Quinn has a personality flaw, not a quirk. Her devious behavior isn’t endearing, it’s representative of a selfish person who is living yet another lie.

Sofer’s character has no real concern for the terrible position she put Paris in. Instead of realizing that Zoe Buckingham’s (Kiara Barnes) younger sister could have disrupted Quinn’s life at any moment, simply by telling Eric Forrester (John McCook) what she knows, another view was taken and used.

Paris was threatened with the loss of her job at Forrester Creations unless she kept quiet. That reminded devoted fans of a similar threat Thomas Forrester (Matthew Atkinson) made to Zoe, Xander Avant (Adain Bradley), and Flo Fulton (Katrina Bowden), her last name at the time, unless that trio didn’t keep their mouths closed about Beth Spencer (Madeline Valdez and River Davidson). Of course, Quinn didn’t run Emma Barber (Nia Sioux) off Mulholland Drive to her death, like Thomas did.

Eric has so often gazed at the image of Quinn, that’s represented in the extremely large photo that hangs in the living room of his lavish estate. That approach represents his problem because Quinn isn’t the idealized person Eric makes himself believe she is.

It is fair to say, while also being arguably harsh, that Eric hasn’t actually offered Quinn chances at redemption. No, it can be said that he’s enabled her behavior.

The separation period that took place in the recent past appeared to be leading toward the end of Queric. But Eric rationalized all that happened, took blame upon himself and, without being access to know all the facts, reconciled with Quinn.

The Bold And The Beautiful Spoilers: Brooke Insists On Helping Eric – Cheating Quinn Must Gohttps://t.co/2JQEDpeDtn

Brooke has wreaked havoc in her day. However, that’s not the issue in this storyline.

Lang’s character knows that Quinn is crooked. Brooke recognizes the flaws within her current rival because of the choices she made long before Sofer’s character came to town. Quinn knows that.

Thankfully Brooke overheard the conversation that Paris and Quinn were having. Brooke’s awareness of trouble leads to a needed confrontation at the planned vow renewal ceremony, with that scene playing out deliciously in daytime on B&B.