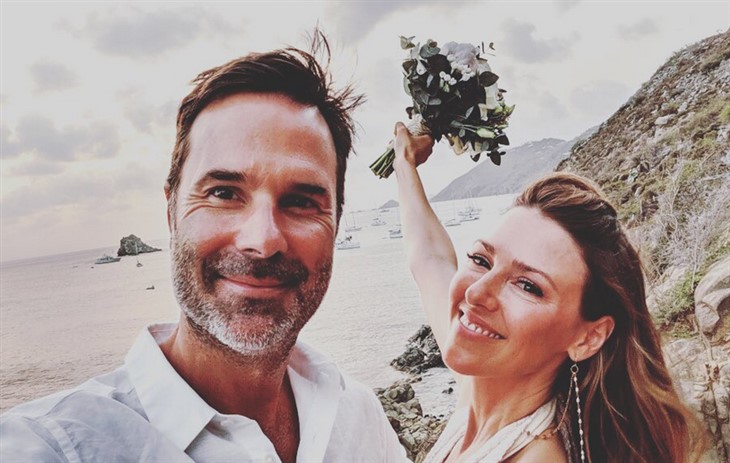 The Young and The Restless spoilers and updates reveals Elizabeth Hendrickson, who is best known for her role in Y&R as Chloe Mitchell, married her long-time boyfriend Rob Meder in 2019. The pair got engaged in

At the time, the proud parents shared their joy at their daughter’s arrival with family and fans. “We are thrilled to introduce our little Josephine James Meder to the world – she’s perfect in every way,” Rob wrote at the time.

Now, the couple are celebrating a special time in their lives: their second anniversary, and let’s say that the couple are happy and love each other “forever and ever”.

The Young And The Restless Spoilers: Michelle Stafford Verifies She Is Staying Put At Y&R

Meder first shared a picture with actress Elizabeth for the first time on Instagram on 24th October 2015. On November 24, 2017, Elizabeth, who also starred in General Hospital, posted a cute picture with Meder taken at sunset, writing, “Lots to be thankful for today… don’t think I would get through all of the sh*tty days without this one by my side. Thank you for always keeping me in check Meder while simultaneously letting me be ME. I’d also like to thank you for listening to all of my new karaoke song choices on repeat in the morning. You’re a great man and an amazing partner.”

They dated for some years before getting engaged around the holiday season in 2018, but before they married, the couple has celebrated a lot of key holidays together. They have often shared pictures of themselves enjoying a vacation in destinations such as New York, Tulum, and Colorado.

After the birth of his first child, Meder thanked the staff at the hospital where his wife delivered, calling them “lifesavers”. He also called his wife “a beautiful force of nature” in his post announcing the birth of their daughter, Josephine.

In his post on May 9, Meder said his wife Elizabeth makes being a mom look easy, and also congratulated her efforts in raising their daughter, teasingly adding that Josephine is lucky to have chosen Elizabeth as her mother.

The Young And The Restless (Y&R) Spoilers: Tara Locke Moves In On Kyle Abbotthttps://t.co/T6DdXnNtkJ

While Rob Meder prefers to keep his work private, Elizabeth Hendrickson has starred in such movies as Searching for Bobby D, That Guy, Criminal Minds and landed her breakout role in 2001 as Frankie Stone on the daytime drama All My Children.

She has an estimated net worth of $3 million, with an annual salary of $400,000. Rob Meder’s net worth is estimated at $1 million.

Be sure to catch up on everything happening with Y&R right now. Come back here often for Young and the Restless spoilers, news, cast and updates.