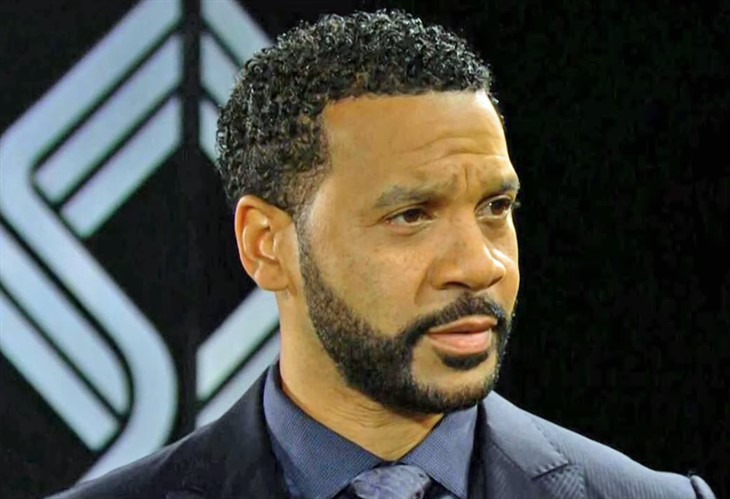 The Bold and the Beautiful (B&B) spoilers tease that legal eagle Justin Barber (Aaron D. Spears) is a playing a dangerous game of cat and mouse with his boss Bill Spencer (Don Diamont). Right now Justin is in charge and in control, a turnaround from the years and years of being under Bill’s thumb.

Who knew that Justin was a disgruntled employee all this time? He’s more than disgruntled, he’s thrown the HR playbook out the window and plans on letting Bill and his son Liam Spencer (Scott Clifton) rot in jail while he sits in the big boy chair.

What’s going on here in this mad scenario? Spears let Soap Opera Digest in on some scoop and we have his thoughts for you here.

Fans were gobsmacked to see Justin turn against Bill, but Spears thinks, “I would say at some point it was bound to happen … you know how Bill Spencer is. Justin feels overlooked and this is his time, like, he has arrived.”

There is no doubt that Justin is talented and capable, but did anyone ever foresee such a drastic change in his behavior? His turn to the dark side has been thrilling and captivating as he gripes about how Bill has kept him down for the last time. The only problem is that Justin is griping to Thomas Forrester (Matthew Atkinson) who is caged like a wild animal!

This can’t end well for Justin, and not just because Dollar Bill will find out and he will triumph. He always does.

Not only has Justin gone rogue, he has kidnapped Thomas who has proof that Bill and Liam are innocent. Still, Spears sees where his character is coming from—and honestly so do many fans. Bill is a ruthless and destructive force of nature, but maybe if Justin had just asked nicely for the keys to the kingdom?

According to him, “Justin is looking to be the full version of who he always thought he could be.”

But he does admit that Justin will have to ultimately face the music: “Okay, did I do the right thing? Yes, my feelings were valid but were the actions that I took correct?” We shall see!