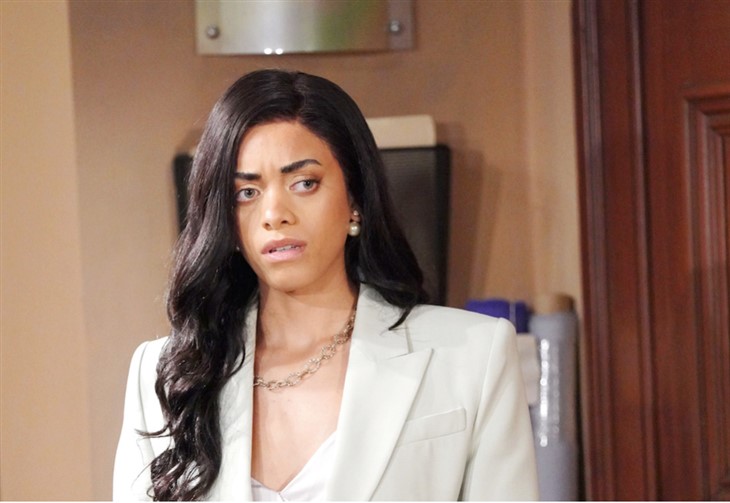 Viewers of The Bold and The Beautiful will recall that Paris Buckingham (Diamond White) watched as Quinn and Carter’s affair was exposed. She was at the Forrester mansion where Eric Forrester (John McCook) and Quinn’s wedding vows renewal ceremony was to have taken place, with Carter officiating. Prior to the commencement of the ceremony, Paris had confronted Quinn about her cheating on Eric and Brooke Forrester (Katherine Kelly Lang) had overheard, after having confronted Quinn herself. As a result, as viewers of The Bold and The Beautiful will recall, Brooke went downstairs to stop the ceremony and Paris went downstairs herself at a later point.

Eric, Ridge Forrester, (Thorsten Kaye), and Wyatt Spencer (Darin Brooks) had all called Brooke on her efforts to stop the ceremony! However, Carter, when pressed, spilled the sordid beans in front of the whole room of guests, including Brooke, Ridge, Paris, Wyatt, Flo Logan (Katrina Bowden) and her mother, Shauna Fulton (Denise Richards)! Quinn and Carter are both very embarrassed, but of the two, Carter is probably more ashamed. Quinn appears to be sorry – but perhaps more of the type of sorry that a criminal is for being caught in a crime! However, it may not all be crocodile tears for Quinn – she did look pretty ashamed of herself, although it could just be grief for wondering if Eric will now divorce her for real, and she will no longer be lady of the manor at the Forrester mansion!

Viewers of The Bold and The Beautiful will recall that Paris has been struggling with whether she should tell her big sister Zoe Buckingham the truth about her fiancé. Viewers of the Bold and The Beautiful will also recall that Quinn had befriended Zoe, and was trying to intervene with Carter on her behalf when he wouldn’t take Zoe back. Paris knows that this will be doubly painful for Zoe to hear, because it will be a double betrayal; not only by her fiancé but by her friend! But at the same time, she knows now that it was revealed at the vow renewal ceremony, it could get back to Zoe through the grapevine, and she wants her to hear it from her before she hears it that way.

When so many people work together in the same office, as Ridge, Flo, Quinn, Carter, and Brooke do, usually thought is not taken to keep what is common knowledge between them a secret! Paris certainly doesn’t want Zoe to be the last to know! Zoe, as previously planned, was ready to catch a flight out of town for a business trip, so Paris rushes to catch her before she leaves to catch the Forrester jet. Paris tries to break the horrible news as gently as she can, but there is no easy way to tell something like that – or to hear it. After she tells Zoe the truth, a heartbroken Zoe leaves on her trip – but she may not return to Forrester Creations after handling the business. No one can blame Zoe for not wanting to walk back into such a painful situation!