The Young And The Restless Spoilers: Ashland Locke Gives Victoria Newman An Option To Opt Out 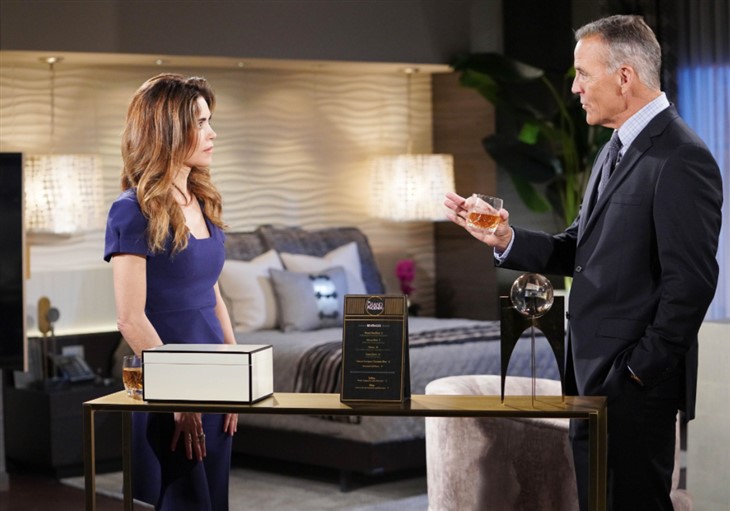 Viewers of The Young and The Restless will remember that Victoria had convinced Ashland to agree to a merger with Newman Enterprises. This, of course, was after she learned of his terminal lung cancer and his prognosis, which wasn’t very good. Victoria had sold Locke on the point that his companies shouldn’t just go to the corporate wolves, but be entrusted to someone who would manage them responsibly and make them continue to grow so that Harrison Locke (Kellen Enriquez) would inherit a legacy.

Viewers of The Young and The Restless will recall, of course, that what Victoria meant was that the “someone” Locke’s companies and legacy for Harrison should be entrusted to was herself!

Then, after a nice dinner they went to Locke’s suite at the Grand Phoenix, where he tried to convince Victoria they should take it to the next level, after planning a business trip together to Los Angeles. Victoria declined; telling Locke that she needed to get home to her children – but that there was still Los Angeles.

Victoria knows that her potential lover has a very grim prognosis, and she has been trying to encourage him to seek treatment but so far he’s declined. He also reminded her that he hadn’t signed off on the merger papers prior to his come-on. Victoria will have to make sure those papers are signed before Locke’s condition progresses and becomes worse, so time is of the essence.

It is obvious to viewers of The Young and The Restless that Locke wants more with Victoria than just a business relationship, even though the ink on his divorce papers from Tara Locke (Elizabeth Leiner) is barely even dry!

Soon, Victoria will see that Locke’s lung cancer is farther advanced than what he’s been letting on, as they have dinner again together at Society. Ashland suddenly becomes very short of breath and is unable to conceal it, as even Adam Newman (Mark Grossman) who is across the restaurant notices and comes to their table to see if he needs help!

Perhaps now, as viewers of The Young and The Restless will recall Victoria’s other brother Nick Newman (Joshua Morrow) found out, Victoria will see that Adam is not the horrible person anymore that he had been in the past. Adam is very sensitive to Locke’s distress and sincerely concerned for him, and that point is not lost on Ashland, even if it is on Victoria. Ashland Locke is very appreciative of Adam’s concern and desire to help if he could.

It is at that point where Ashland gives Victoria an out from their rapidly progressing relationship – he realizes a romantic relationship with a dying man is not a complication she needs in her life. Locke makes clear that he is a dead man walking, and he wants the relationship with Victoria because he has found a kindred spirit in her, but he doesn’t want to lead her on and if she wants to break things off now, he will understand.