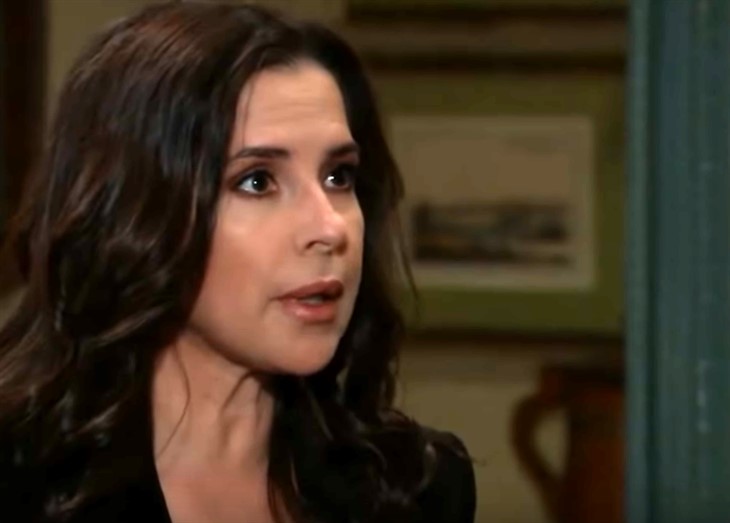 General Hospital spoilers tease that Samantha McCall (Kelly Monaco) will question Jason Morgan’s (Steve Burton) motives for his marriage to Carly Corinthos (Laura Wright) in an upcoming episode of General Hospital. But might some jealousy and regret be motivating Sam?

General Hospital viewers will remember that Sam broke up with Jason several months ago over his violent lifestyle. Port Charles had been relatively peaceful from violence for several months, if not years, prior to the arrival of Cyrus Renault (Jeff Kober) and his minions, who were trying to take over Sonny Corinthos’ (Maurice Benard) territory.

Things had changed since Sam had children, one with Jason, the other with Drew Cain (then Billy Miller). It broke her heart to do so, but she knew to keep her children safe that she had to break up with Jason.

Carly was afraid at the time too – Jason and Sonny were having a family meeting in the Corinthos home with both women, and there was talk of them and all the children being moved to Sonny’s private island near Puerto Rico, and Josslyn Jacks (Eden McCoy) moving in with her father, Jasper “Jax” Jacks (Ingo Rademacher).

But now, there is a new crime family threatening to take over Sonny’s territory, and with Sonny presumed dead and Carly having had him declared dead long ago, Jason and Carly have made plans to get married in order to present a united front to the Novaks! For Sam, even though she broke up with him, seeing him getting married when she has not moved on may be something that causes her regret and perhaps even some jealousy!

General Hospital viewers will recall that Sam was not one of the first people to find out that Jason and Carly had decided to get married. Carly’s immediate family found out first, with Jason trying unsuccessfully to let Britt Westbourne (Kelly Thiebaud) down easy. General Hospital viewers will recall that Britt took it very hard, but bounced back pretty quickly, having a romp in the hay with Jax that night!

But Sam was with Jason for many years and has a child with him – and longtime General Hospital viewers will recall that she and Carly were once rivals. Carly and Sam even argued over Jason’s health care, and Carly didn’t want a risky brain operation performed on Jason several years ago while Sam wanted to take the chance to save his life! There is something about one’s ex and the father of one’s child moving on with one’s former rival that just might not sit right with Sam.

As long as Jason hadn’t moved on to the point of being married to someone else, there has likely been that place in the back of Sam’s mind that tells her they could get back together. But if he’s married to someone else – especially Carly – there is no going back! Jason even said as much to Carly when he suggested the extreme move!

Sam has always felt Jason has remained under Carly’s thumb and of his own doing, at that. When she confronts him about his motives for marrying Carly, she will likely bring that up plus other arguments. She may feel jealous and regret breaking up with him now, but Jason has to do what he has to do, to protect “the family”!