‘The Bold And The Beautiful’ Spoilers: Eric Finally Sees The Light – Quinn Kicked Out In Disgrace 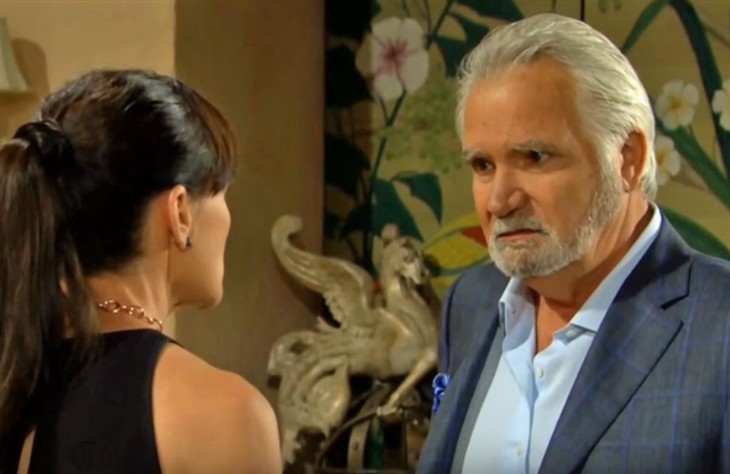 Yes, Quarter happened. Quinn then followed by nodding in agreement. And with that the fabled Queric pairing, that had survived many daytime storms, is over.

Eric finally saw the light. He said that he loved and defended Quinn, with his use of past tense verbs reinforcing the new world on B&B.

Quinn actually blamed Brooke Logan Forrester (Katherine Kelly Lang) for what happened. She had the guts to say, with deep anger, that if Brooke and Paris Buckingham (Diamond White) hadn’t blabbed about what happened, then the problem wouldn’t exist. That infinitely false statement was slapped away by the man Quinn claims to love like no other.

Eric, being released from Quinn’s spell, rebuked his soon to be ex-wife, telling her that Brooke and Paris didn’t cheat and then lie about doing so. It was also ironic that Ridge Forrester (Thorsten Kaye) stood aside of Brooke as the dramatic events unfolded in the Forrester mansion’s spacious living room. As fans recall, Kaye’s character was drawn into Quinn’s web a handful of years ago and kissed her on the beach.

The difference between Carter’s reaction and Quinn’s was telling. Carter was remorseful and sincerely apologetic. In contrast, Quinn immediately began to play on Eric’s emotions and beg forgiveness.

McCook’s character is deeply disappointed in Carter, as he was personally wronged by him. Saint-Victor’s character is thought of as family, as evidenced by his presence as the officiant at the vow renewal ceremony, his seat on Forrester Creations’ Board of Directors, and his years as lead counsel for the family’s fashion business.

The Bold And The Beautiful Spoilers – Quinn Fuller Is Resilient

Quinn is hardly likely to never be seen again. She will survive and no doubt seek revenge.

It’s possible that Quinn will convince herself that Eric will cool down and give her yet another second chance. That’s highly unlikely to happen. So, Quinn will be mad when that realization sinks in.

Brooke and Paris are smart. They know to watch their backs and to look out for each other. As for Quinn, there’s no telling what she’ll do in the days ahead. But for now, the lush life she proved ungrateful for is over, finished, and done.

The noise heard while readers perused this post was the fans cheering, both for Sofer, who, along with Saint-Victor was stellar in this storyline, and in response to Quinn being rightly deposed. Next, it’s time for Eric to remove the picture of Quinn from the mantel and forward it to her at a to-be-determined mailing address.