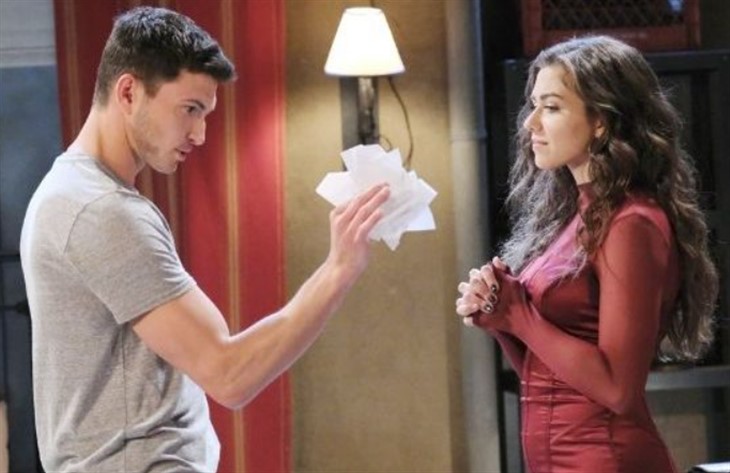 Days of Our Lives spoilers tease that Ben Weston (Robert Scott Wilson) and Ciara Brady Weston (Victoria Konefal) will clash over both wanting to hire Justin Kiriakis (Wally Kurth) in an upcoming episode of Days of Our Lives!

Days of Our Lives viewers will recall from recent episodes of Days of Our Lives, that Ciara is taking Ben to court to force a divorce. Ciara is in a great big hurry to marry Theo Carver (Cameron Johnson) and that is why she came to Salem with him when he came for the anniversary party of his sister Lani Price Grant (Sal Stowers) and Eli Grant (Lamon Archey). She was waiting on Ben’s bed in his apartment with a second set of divorce papers, which he promptly tore up in front of her.

Days Of Our Lives Spoilers: Chanel Dupree Admits Her Feelings To Allie Horton

He tried to wrest some memories out of her by showing her different things and thought he sensed some memories in her of when he rescued her from her glass encased prison, which blew up after she herself accidentally tore a live gas pipe loose. Ben was the one who dug her out of the rubble and got her to the emergency room!

Unfortunately for Ben, what he saw in her eyes may have just been a little bit of sympathy for his obvious pain although she would not allow herself to admit it. As they continued to argue, Theo burst in ready to rescue her from Ben if that is what needed to happen, after coming from Julie’s Place where she had told Lani about Ben having tried to inject Ciara with an amnesia serum of Dr. Wilhelm Rolf’s (William Utay) who Theo considered a literal mad doctor.

Both Ben and Ciara will want to hire Justin to represent them in the divorce court, which will give them something else to argue about! But as Days of Our Lives viewers know, the ultimate decision is up to Justin – he may not even want to get in the middle of this mess and may decline both their requests!

Justin certainly would not be able to represent both of them and may not want to choose one over the other. But who else could either of them ask? It would be a conflict of interest for Belle Brady (Martha Madison) – even if she were willing to represent Ben, Ciara is her sister-in-law and Ciara has already been on the defensive with both Shawn Brady (Brandon Beemer) and their daughter Claire Brady (Isabel Durant).

Days Of Our Lives (DOOL) Spoilers: Gabi And Jake Have A HUGE Secrethttps://t.co/AEgYSsU9my

Ciara had hurt Claire afresh once more with having no memory of their having made amends and become close either, so of course for that reason Claire sides with Ben and Shawn was in the middle! Shawn had advised Ciara not to rush into marriage with Theo because of her lack of memories, just like Ben had, and Belle would have to agree.

There aren’t but so many attorneys in Salem, and Ben and Ciara would have to have separate ones. So, with Belle out of the question for either of them because of conflict of interest, and there only being one of Justin, Ben and Ciara argue over hiring him without either having even asked him yet!