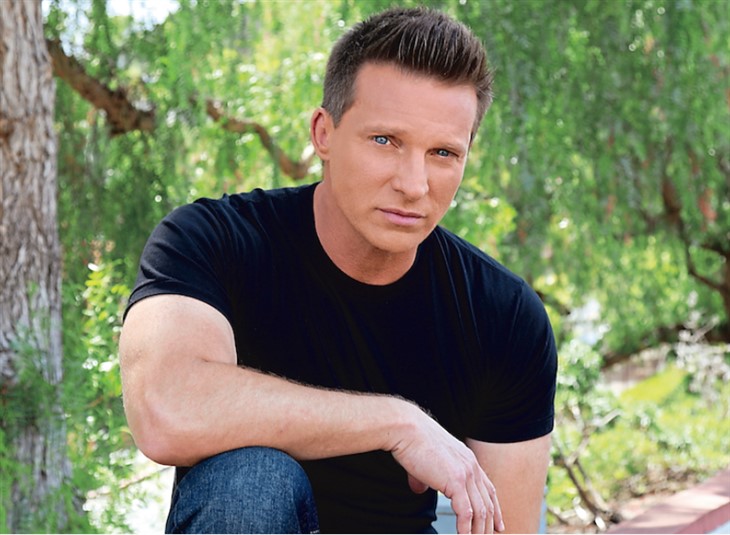 General Hospital (GH) spoilers reveal that Steve Burton loves to keep his fans updated on the latest and greatest things he’s got going on in his life. He’s just posted an Insta pic that we think you’ll want to see, but we’ve got to issue a disclaimer, he’s not working out, he’s fully clothed this time!

He referenced his snazzy outfit by referring to this year’s Emmy awards in which he was nominated in the outstanding performance by a lead actor in a drama series category.

General Hospital Spoilers – Steve Burton Has It Going On

He looks stunning in a double breasted sky blue button down shirt, black vest and black and white striped tie and he captioned the photo: “Emmy suit. No jacket. Hope your 4th was great. Get it.”

If we didn’t know better we’d think he was channeling his alter ego Jason Morgan, a man of few words who makes every sentence count!

His fans were suitably (pun intended) impressed. One posted, “Awe shucks aren’t you a fox 🦊!!! Always have been Steve!!! I’ve been watching GH on and off (mostly on) since 1978 lol. Long time yea!!!”

Another asked, “What happened to your forehead? Looks all red. Always handsome.” Steve doesn’t get into details, but it looks like he has a red spot on his forehead, maybe from a strenuous workout?

Another fan spoke to Jason’s current storyline noting, “Yo Jax got your girl. Its time for some gangster sh#t.” 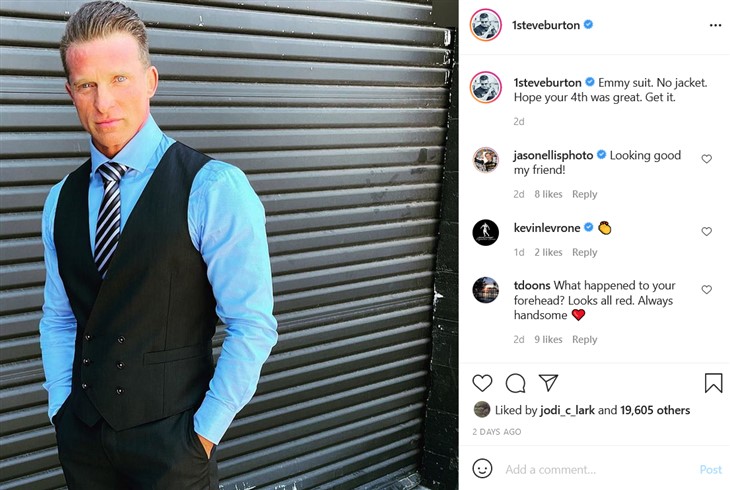 Indeed, Jason’s nemesis Jasper ‘Jax’ Jacks (Ingo Rademacher) has picked up where he left off with Britt Westbourne (Kelly Thiebaud). Fans were totally shipping Bason when the rug was rudely pulled out by none other than Carly Corinthos (Laura Wright).

Just when fans thought Jason was going to get a real life, with someone who could match his checkered past, the romance was over before it got started. Now there is a Jarly wedding coming up and Britt has drowned her sorrow in pity sex. Does this portend a pregnancy in which she claims Jax is the baby daddy when it’s really Jason’s honor?

Fans are speculating like mad that this will be the case. What happens next? Could Sonny Corinthos (Maurice Benard) return in the nick of time to put an end to the madness?