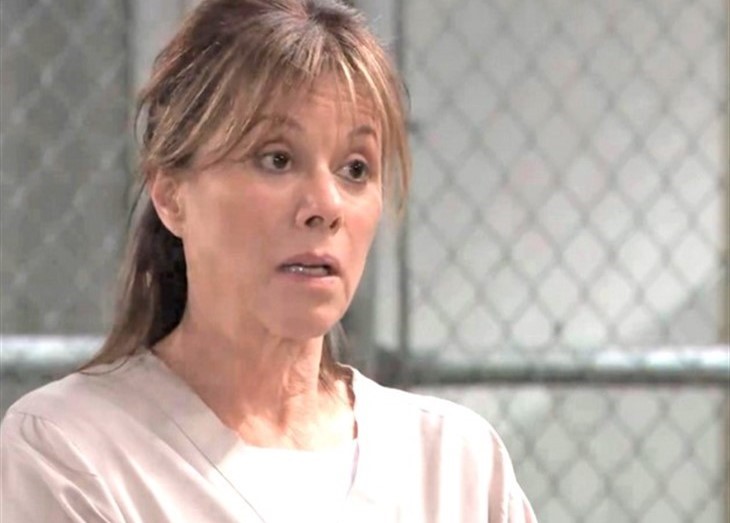 General Hospital (GH) spoilers indicate that Alexis Davis (Nancy Lee Grahn) may have given herself a stern warning in a dream.

But will Alexis follow her own advice? As viewers know, Alexis was placed in solitary confinement after an altercation with a prison guard. The whole situation came about as a direct result of Alexis’ desire to help her ex lover and current jail resident, Shawn Butler (Sean Blakemore). Alexis and Shawn had been found guilty of similar crimes, but were sentenced completely differently by the same judge.

After some investigating thanks to documents provided by Molly Lansing-Davis (Haley Pullos), the judge in question, Naomi Carson (Anita Finlay) apparently found out what was going on and had Shawn’s library privileges revoked which led to the altercation which landed Alexis in solitary confinement for three days.

General Hospital Spoilers – It came to Alexis Davis in a dream!

After going quite a bit stir crazy in solitary, Alexis finally managed to fall asleep. But who should show up in her dream except for a much better put together version of herself! Dream Alexis told her likeness that she should keep her head down while in prison.

But that is against everything that Alexis believes in, so it remains to be seen if she takes her own advice. As much as she wants to help Shawn, it would be in her own best interest to back off. But that doesn’t really sound like Alexis, does it? It hasn’t in the past, but she has her own demons now, and may back off for her peace of mind. But that doesn’t mean that the cause will be dropped because Alexis’ daughter has inherited her penchant for advocacy.

GH Spoilers – Molly Lansing-Davis may very well save the day!

But just because Alexis’ hands may be tied, doesn’t mean the situation will be swept under the rug. Thanks to Shawn, Molly is armed with the knowledge that Alexis was investigating Judge Carson because it appeared that she was giving much higher sentences to people of color for the same or similar criminal infractions.

Molly had already thought it strange that the judge wanted to mentor her, given that she was the one who sentenced her mother. But now that Molly knows that Alexis was investigating Carson as best she could from the prison walls, Molly may take over where Alexis left off.

But one thing about Alexis is that she is definitely a control freak. Not only that, but she won’t want her daughter to be put in any type of danger, personally or professionally, for something she herself started.

Perhaps Alexis and Molly will end up working together, with Alexis advising Molly as best she can from prison visits. The entire situation is volatile and could center blow up in both or either of Molly and Alexis’ faces. Molly hasn’t taken the Bar yet. Judge Carson could somehow make some real trouble for both mother and daughter!

Will Alexis back down from the fight? Will she happy or scared to find out Molly is working her own angle to expose the judge? Will Molly even tell her mother what she is up to? Prison drama is high in Pentonville so stay tuned to General Hospital airing weekdays on ABC. And don’t forget to check back right here regularly for all your General Hospital news, information and spoilers!