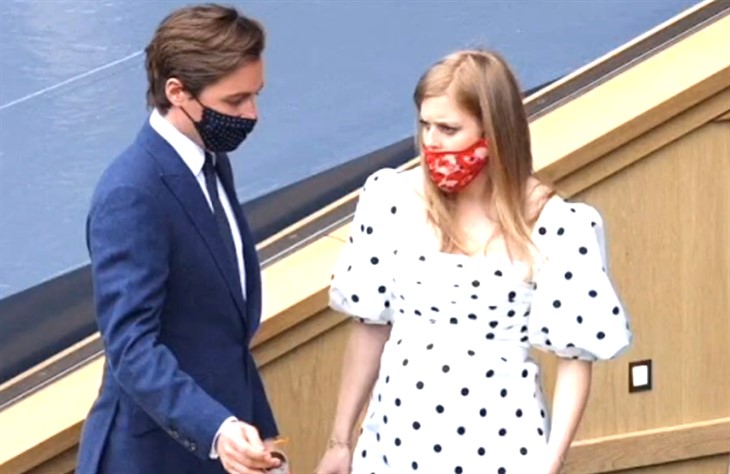 British royal family news reveals that the royal family have been in attendance at the Wimbledon Tennis Championships in London. Today it was mom to be Princess Beatrice who graced the stands, as she and husband Edoardo Mapelli Mozzi made the scene.

The couple are expecting their first child while Edoardo, has one young son from a prior relationship. This is her first official outing since announcing her pregnancy.

Beatrice was dressed to the nines in a gorgeous frock with a square neck line, puff sleeves and frilly hem. The dress was similar to one worn by her mother Sarah Ferguson when she attended a polo event at Windsor in 1986 and several royal watchers commented on the likeness.

Royal Family News: The Queen Must Approve All Royal Engagements, How Did Harry And Meghan Squeak Past?

Beatrice chose to wear her lovely red locks down and she carried a purse and wore a red and pink floral face mask. Her mask is in accordance with government guidelines regarding Covid-19. Last week Kate Middleton was at Wimbledon when she was alerted that she had been exposed to a COVID positive person. She immediately left and has been self-isolating.

The couple were with Beatrice’s aunt Sophie, Countess of Wessex on day ten of the event.

Royal Family News – Sophie Countess Of Wessex Was At Wimbledon

Beatrice’s husband Edoardo looked handsome in a navy blue suit, white shirt and polka dot tie. Like Beatrice, Sophie wore her blonde hair down, and she was dressed in polka dot chiffon dress. Like Edouardo she wore sunglasses.

Sophie has been said to be Queen Elizabeth’s favorite in law and she rarely if ever makes a misstep in public.

Royal Family News – Who Is The Queen’s Favorite In-Law?

At Wimbledon she looked dazzling, carrying a beige purse and a minimal makeup look consisting of a nude lip gloss, light mascara and a spot of blush.

Over the course of the tournament several royal family members have been seen enjoying themselves watching the competition. Earlier Kate and her husband William brought their son George and he appeared delighted, clapping and yelling along with the crowd.

It is believed that William caught coronavirus last year, and has recovered fully. There is no word about Kate, and whether or not she has symptoms or has had a positive coronavirus test since her isolation began. She has received both shots and was regularly testing before the exposure to the unnamed coronavirus patient.