The Bold And The Beautiful Spoilers: Shauna Seduces Ridge As Payback For Brooke Destroying Quinn’s Life 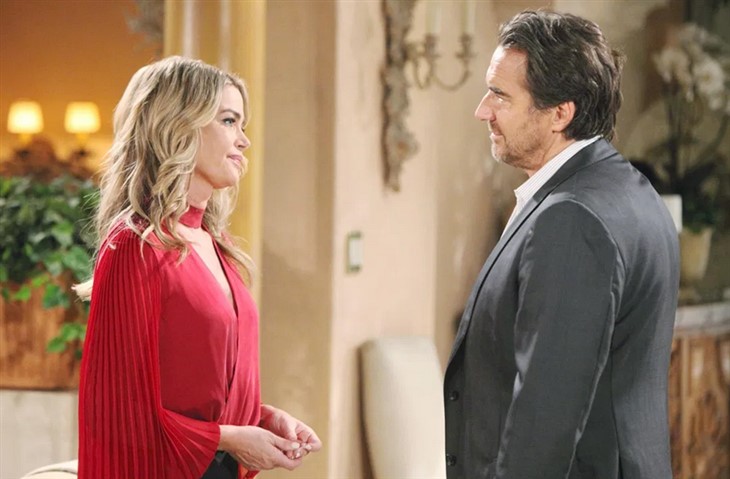 The Bold and the Beautiful spoilers indicate that Brooke Logan (Katherine Kelly Lang) will face retaliation.

The feud between Brooke and Quinn Fuller (Rena Sofer) is once again in full effect. After discovering Quinn’s affair with Carter Walton (Lawrence Saint-Victor), Brooke didn’t waste no time in ousting the two. She did it in true soap fashion by spilling the beans during Quinn and Eric Forrester’s (John McCook) vow renewal.

Brooke’s proud of herself for busting Quinn, however her actions are going to have consequences.

The Bold And The Beautiful Spoilers – Shauna Fulton The Good Friend

As Quinn deals with the fallout from her affair, one person she can count on for support is her good friend Shauna Fulton (Denise Richards). Shauna knew about Quinn and Carter from the beginning. To help protect her friend’s secret, Shauna pretended to be Carter’s mistress when Zoe Buckingham (Kiara Barnes) became suspicious.

With Quinn’s marriage over and her about to get kicked out of the Forrester mansion, Shauna’s heart aches for her friend. Although what Quinn and Carter did was wrong, Brooke had no right to reveal the secret, especially in a public way.

Like Quinn, Shauna too has had problems with Brooke. Shauna’s seen how judgmental the Logans are, when they themselves aren’t perfect.

With Brooke responsible for Quinn’s downfall, Shauna is seething mad. She feels it’s time Brooke got payback, and Shauna’s going to be the one to deliver it.

Shauna decides the best way to get back at Brooke is to snag her husband Ridge Forrester (Thorsten Kaye) away from her. Shauna and Ridge are friends, and at one point it appeared the two were going to become a couple. However, Ridge always left Shauna to go back to Brooke.

Brooke and Ridge are happy now, yet as B&B fans know that’s not going to last long. The couple’s going to have more problems, and one of them is Shauna.

Deep down Shauna still loves Ridge, even though she knows his heart belongs to Brooke. Although in the past, she vowed not to interfere in the marriage, this time she feels her actions are justified. Brooke put her nose into Quinn and Eric’s business, now it’s time someone returns the favor.

The Bold And The Beautiful Spoilers: Wyatt Spencer Notices Something Suspicioushttps://t.co/pcqCC1EvKz

Although, Brooke and Ridge are committed to each other, at the first sign of any trouble, Ridge is always out the door. Shauna knows the couple’s marriage isn’t perfect and it’s only a matter of time before cracks appear again. When that happens, Shauna’s going to be quick to make her move.

With Ridge vulnerable, Shauna will seduce him and convince him Brooke’s not the right woman for him. Ridge is easily tempted by other women, and given his history with Shauna, his old feelings for her could resurface.

While Shauna sets her seduction plot in motion, Brooke’s going to be fuming mad. Brooke loves Ridge, he’s her destiny, and she’s not giving up on him without a fight. Brooke thought she had to watch her back when it came to Quinn, but it’s Shauna who she has to keep an eye on.

It looks like a new war will be brewing between Brooke and Shauna. So who will come out on top and win Ridge’s heart? Keep checking Hollywood Hiccups for more Bold and Beautiful spoilers, news, and updates.